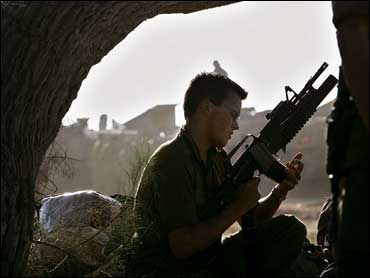 Israeli planes attacked a bridge in northern Gaza late Tuesday, Israel Radio reported, and Israeli tanks were said to be on the move, possibly signaling the start of a military operation.

Palestinian security forces said Israeli tanks were on the move near the Israeli village of Nahal Oz, a main Israeli staging area just outside Gaza, but they had not yet entered the territory.

Israel has been massing troops and armor around Gaza since Sunday, when Palestinian militants tunneled under the border and attack an Israeli army post at a Gaza crossing, killing two soldiers and abducting a third.

This comes as a Palestinian militant group said Tuesday that the abducted Israeli soldier was alive in a "secure place."

Negotiators from the ruling Hamas movement, trying to defuse building tensions, said they had accepted a document implicitly recognizing Israel. But two Syrian-based Hamas leaders denied a final deal had been reached.

Israel said only freedom for the captive soldier, Cpl. Gilad Shalit, could defuse the crisis, not a political agreement.

Israeli Foreign Ministry spokesman Mark Regev said Tuesday's agreement between Hamas and the Fatah Party of President Mahmoud Abbas was a "non-starter" because it failed to meet international demands.

Regev said Hamas leaders "should have been trying to orchestrate the release of Cpl. Shalit" rather than "devoting time and energy to other matters of no real significance."

White House press secretary Tony Snow said he had only seen media accounts of the Hamas-Fatah accord, but reiterated that Hamas had to meet three conditions before a crippling aid boycott could be lifted.

"Once again — we can all recite from memory now — recognize Israel's right to exist, renounce terror, and abide by all past agreements. Those are the preconditions," Snow said in Washington.

On a flight to Pakistan, Secretary of State Condoleezza Rice urged Israel to "give diplomacy a chance."

Complicating matters was a new claim by the Hamas-linked Popular Resistance Committees, one of the three groups that carried out Sunday's assault, that it had also kidnapped a Jewish settler in the West Bank.

The fate of the 19-year-old captive soldier has riveted Israelis, with Shalit's face plastered on newspapers and callers to talk shows praying for his safety.

In an interview Tuesday with The Associated Press, Noam Shalit begged the captors of his wounded son to provide medical care and asked "to hear his voice and to see his face."

Israeli Prime Minister Ehud Olmert rejected the kidnappers' demands to free Palestinian prisoners and instead approved plans for a military push into Gaza. About 3,000 soldiers, along with tanks and armored vehicles, massed along Israel's border with the territory, and commanders said they were awaiting orders to move in.

Hamas' Web site said there were "back channel" negotiations with Israel over a prisoner release.

Israeli military officials said a negotiating team has been activated, but declined to release further information.

The kidnappers did not say where Shalit was being held or release any photos of him. Israeli officials said they believed the soldier suffered light wounds to his stomach and was being held in southern Gaza.

On Tuesday, for the first time since Sunday's assault, in which two Israeli soldiers and two militants were killed, militants acknowledged they were holding Shalit and said he was alive.

"The soldier is in a secure place that the Zionists cannot reach," said Mohammed Abdel Al, spokesman for the Popular Resistance Committees. He said his group also took a West Bank settler hostage.

Mohammad Nazal, a Damascus-based member of the Hamas politburo, said the militant group would not agree to free the Israeli soldier "without a deal."

"No release without something in return," he told AP. "This is the popular demand and we cannot let down our people."

Egyptian officials said their government asked Hamas to release the soldier and deployed 2,500 extra soldiers along the border with Gaza to prevent an influx of Palestinians if Israel invaded. Egypt also imposed a nighttime curfew on residents along the border.

Egypt's intelligence chief, Omar Suleiman, urged Hamas' Syria-based leader, Khaled Mashaal, to push for Shalit's release, the officials said on condition of anonymity because of the sensitivity of the situation.

Shalit's abduction has exposed rifts between Hamas hard-liners such as Mashaal and its local leadership in Gaza, which has shown a greater willingness to compromise.

Israel has clamped a tight closure on Gaza that prevents merchants from leaving and fishermen from sailing off the Mediterranean coast, the army said. It also closed all crossings into Gaza.

Hundreds of Palestinians were stranded on the Egyptian side of the border at the Rafah crossing, said the director of security at the Palestinian crossings, Salim Abu Safiah.

Anticipating an invasion, Palestinian militants piled up sand on roads near the border and in Gaza City.

"They have to think a thousand times before committing any stupid acts and going forward with steps that will lead them to hell," Hamas' military wing said in a statement.

Abbas, a moderate, has been trying to coax Hamas into endorsing a document that calls for a Palestinian state alongside Israel, in effect recognizing the Jewish state. He said the proposal, put forth by Palestinians jailed by Israel, could help end Western and Israeli sanctions and pave the way to reopening peace talks.

"We have an agreement over the document," said Ibrahim Abu Najah, coordinator of the "national dialogue" over the proposal.

Fatah and Hamas negotiators in Gaza said they had reached agreement in which all parties accepted the document, calling the deal a breakthrough. But exiled Hamas leaders in Syria said the deal was not complete.

"Dialogue achieved major progress, and we hope within the next few days we will reach agreement on a joint agenda, but not today," Moussa Abu Marzouk, a top Hamas official, said in Damascus.