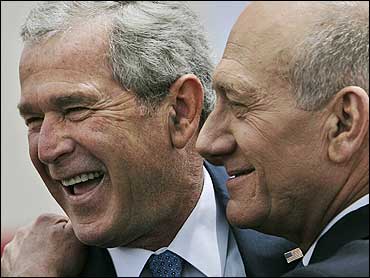 World leaders have celebrated Israel's astonishing growth and prosperity created in its 60 years as a modern state and now the festivities are over. President George W. Bush and scores of other luminaries from around the world paid homage to the Jewish state and the Israeli people in several days of celebratory meetings and speeches in Jerusalem.

But for all the progress, all the democracy and all of the achievements of Israel and its people, there remains at its core a key piece of unfinished business: making peace with all its Arab neighbors and most especially with the Palestinians.

Israel proudly boasts of the best military force in the Middle East and its soldiers have defended the nation seven times in six decades. Peace treaties have been signed with Egypt and Jordan, two of its closest neighbors. Still, Israelis have not been able to come to political accommodation with the Palestinians, the people they have shared the land with for centuries.

While Israel celebrates its 1948 victory in the war of independence, the Palestinians are left to acknowledge another year of loss. It is called the "nakba" or "catastrophe" in Arabic and it refers to Palestinian families who either left their lands or were driven off by the Israelis 60 years ago. No matter whose narrative you accept, the grievances of the Palestinians are real and have to be dealt with before Israel can celebrate a full peace.

Why is the problem still unresolved after six decades? There is enough blame to go around. Yes, the Palestinians have missed opportunities and so have the Israelis. The 1993 Oslo agreement worked out between negotiators for the two parties launched them on a path toward peace but the destination has not yet been reached. The past decade saw numerous attempts to negotiate a solution, including intense involvement by the Clinton administration, to no avail.

Now, the Bush administration, after staying on the diplomatic sidelines for seven years, is trying a new approach which it launched in Annapolis last November and which is aimed at creating a Palestinian state by the end of 2008. Only the most optimistic Mr. Bush and his Secretary of State Condoleezza Rice among them give the parties a serious chance of succeeding. One reason cited by those more pessimistic about the chances of reaching a deal is the apparent unwillingness of the Bush administration to pressure Israel to make significant concessions to the Palestinians and without such pressure, the argument goes, the Israelis will not offer a deal the Palestinians can accept. The same criticism was made of the Clinton administration's efforts.

Why is this so difficult? The problems are so well known they are called simply "final status" issues: defining the borders of a future Palestinian state; dividing Jerusalem as a capital city for each; the right of return for Palestinian refugees to come back to the land and to homes that once belonged to them and their families; and resolving the question of secure borders and a lasting peace for Israel which will not leave it exposed to the constant possibility of attacks from their closest neighbors.

Israel, the far stronger power, has not always been a benign occupier. It has since its victory in the 1967 war occupied East Jerusalem, the West Bank and Gaza (which it relinquished unilaterally in 2005). It has built settlements and allowed Israelis to takeover lands formerly occupied by Palestinians. The Palestinians have never accepted defeat and have vowed to continue armed struggle in one form or another. In earlier rounds of violence suicide bombers killed innocent Israelis. In its current form the resistance is led by Hamas, which operates from its base in Gaza and permits a steady stream of rockets fired by various factions to land on Israeli towns. Ultimately, this will lead to another Israeli military crackdown on the Palestinians and another cycle of violence between the two.

Even though Israel's Prime Minister, Ehud Olmert, and the President of the Palestinian Authority, Mahmoud Abbas, are having regular meetings, both are politically weak and neither seems willing to make significant concessions on the main issues. In other words, the likelihood that either would be willing to make politically tough decisions, which by their nature would have them risking their tenuous hold on power, is very slim indeed. There wasn't even enough progress for Mr. Bush to hold a three-way meeting with Olmert and Abbas when he was in Jerusalem this week.

The optimists argue that if a deal is to be struck there is still time. Even though Mr. Bush has only eight months left in office, it is a given in Middle East negotiations that almost nothing significant gets decided until the last minute - or five minutes past the last minute.

Thus, there are those who can cling to whatever slim rays of hope they see. One of those optimists is Condoleezza Rice, who just days before Mr. Bush's trip, on one of her many trips to nudge the parties along, recalled the "historic and courageous" decision of President Harry Truman to recognize the founding of Israel only eleven minutes after it declared its independence. Rice told reporters: "I hope someday that somebody will be - I mean it will be well beyond our watch - somebody will be coming to celebrate the 60th anniversary… of the Palestinian democratic state one day, that some American president will say George W. Bush took a courageous decision to support the creation of a Palestinian state and it came into being and we are here to celebrate that."

To the political successors of Mr. Bush, Olmert and Abbas, each of whom will have their own opportunity to craft a solution which has eluded their predecessors, I say good luck. It is time.