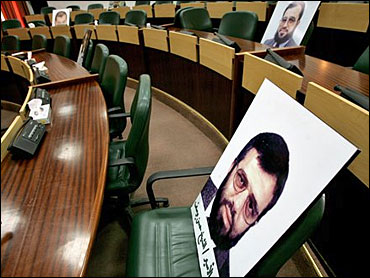 Israeli troops have arrested dozens of officials from the Hamas-led Palestinian government, while expanding their military operation in Gaza.

Palestinian Deputy Prime Minister Nasser Shaer was among those arrested.

Israel says it holds Hamas responsible for the capture of an Israeli soldier four days ago, reports CBS News correspondent Robert Berger, and the abduction of Cpl. Gilad Shalit shows that the Palestinian Authority is a terrorist regime.

"The main purpose behind this military operation is first of all to bring the release of the Israeli soldier," defense spokesman David Hacham said.

Also Thursday, Israeli aircraft fired at a car carrying Palestinian militants in Gaza City, the Israeli military said. At least one person was wounded, but witnesses said the missile missed the car and the Islamic Jihad activist who was targeted.

Adding to the tension, the body of a kidnapped 18-year-old Jewish settler who was shot in the head was found in the West Bank, Israeli security officials said. Palestinian militants said they executed Eliahu Asheri, whose body was found buried near the West Bank city of Ramallah.

The Popular Resistance Committees in Gaza had said they would execute Asheri if the Israeli army did not pull out of Gaza after its incursion there Wednesday, but an Israeli military official says Asheri was killed immediately after his abduction Sunday.

Jewish religious leaders declared that hitchhiking with an unknown driver, as Asheri had done, is a sin, but with minimal bus service between settlements, hitchhiking is common.

The soldier's capture on Sunday by Hamas' military wing and two affiliated groups, and Israel's subsequent military incursion into Gaza threatened to bring the two sides to the brink of all-out war. Hamas, which took power after winning parliamentary elections in January, has resisted international pressure to renounce violence and recognize Israel.

An Israeli military official said 64 Hamas officials were arrested in the early-morning roundup. Among them were eight of Hamas' 23 Cabinet ministers and 20 of its 72 lawmakers, Palestinian officials said.

A Hamas official described Israel's detention as hostage-taking but would not say whether it would be willing to turn over an Israeli soldier for their release.

"It is premature to discuss this matter," Osama Hamdan told The Associated Press, noting that Israel has not officially stated its intentions. "If the Israelis want to trade them (the Hamas politicians) for the soldier then let them say it frankly and then we will react."

Israeli Foreign Ministry spokesman Mark Regev said the ministers and lawmakers were not taken as bargaining chips for the release of Shalit, but because Israel holds Hamas responsible for attacks against it.

"The arrests of these Hamas officials ... is part of a campaign against a terrorist organization that has escalated its war of terror against Israeli civilians," Regev said.

Israel has said it would not negotiate Shalit's release with the militants and has rejected demands to free Palestinian prisoners in exchange for information about the captured soldier.

There were conflicting reports on whether Palestinian Deputy Prime Minister Nasser Shaer, who has called for Shalit's release, was arrested.

Officials will be questioned and eventually indicted, the Israeli army and government officials said.

Palestinians were outraged by the arrests.

"We have no government, we have nothing. They have all been taken," said Saeb Erekat, an ally of the moderate Palestinian president, Mahmoud Abbas. "This is absolutely unacceptable and we demand their release immediately."

Although the Israeli action was touched off by the soldier's capture, Israeli Prime Minister Ehud Olmert's government has also been alarmed by a surge in the firing of homemade rockets on Israeli communities bordering Gaza.

Residents said an Israeli Apache helicopter fired a missile at an electrical appliances store near Khan Younis before daybreak. Inside, computers, refrigerators and other appliances were charred, and owner Majid Abu Daqua, 40, said he lost more than $60,000 worth of equipment.

Israel said the shop was used to store and manufacture rockets and other weapons.

Palestinian militants detonated a land mine along the border with Egypt on Thursday, blowing open a hole in the border fence, Palestinian witnesses said. Palestinian and Egyptian troops tried to prevent people from fleeing Gaza into the safety of Egypt.

In a clear warning to the Syrian president, Israeli airplanes flew over his seaside home near the Mediterranean port city of Latakia in northwestern Syria, military officials confirmed Wednesday night, citing the "direct link" between his government and Hamas. Israeli television reports said four planes were involved in the low-altitude flight, and that Assad was there at the time.