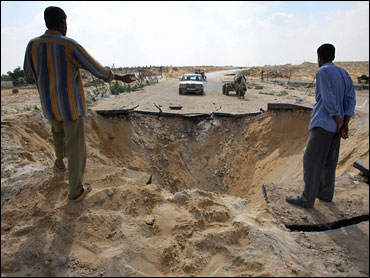 Israeli troops rounded up dozens of ministers and lawmakers from the Palestinians' ruling Hamas party on Thursday, while pressing a military campaign in Gaza meant to win the release of an Israeli soldier held by Hamas gunmen.

Adding to the tension, the body of a kidnapped 18-year-old Jewish settler who was shot in the head was found in the West Bank, Israeli security officials said. Palestinian militants said they executed Eliahu Asheri, whose body was found buried near the West Bank city of Ramallah.

The soldier's capture on Sunday by Hamas' military wing and two affiliated groups, and Israel's subsequent military incursion into Gaza threatened to bring the two sides to the brink of all-out war. Hamas, which took power after winning parliamentary elections in January, has resisted international pressure to renounce violence and recognize Israel.

An Israeli military official said 64 Hamas officials were arrested in the early-morning roundup. Of those were eight of Hamas' 23 Cabinet ministers and 20 of its 72 lawmakers, Palestinian officials said.

Israeli Foreign Ministry spokesman Mark Regev said the ministers and lawmakers were not taken as bargaining chips for the release of Cpl. Gilad Shalit, but because Israel holds Hamas responsible for attacks against it.

"The arrests of these Hamas officials ... is part of a campaign against a terrorist organization that has escalated its war of terror against Israeli civilians," Regev said.

Israel has said it would not negotiate Shalit's release with the militants and has rejected demands to free Palestinian prisoners in exchange for information about the captured soldier.

There were conflicting reports on whether Palestinian Deputy Prime Minister Nasser Shaer, who has called for Shalit's release, was arrested.

Officials will be questioned and eventually indicted, the Israeli army and government officials said.

Palestinians were outraged by the arrests.

"We have no government, we have nothing. They have all been taken," said Saeb Erekat, an ally of the moderate Palestinian president, Mahmoud Abbas. "This is absolutely unacceptable and we demand their release immediately."

Hamas ministers had expected such arrests. Shaer, who is the senior among them in the West Bank, was not sleeping at home when the sweep took place, his wife said.

She said she had been in contact with him, and that he was not arrested. Employees at the Ministry of Education offices in Ramallah reported seeing him in the building in the late morning.

But at a news conference in Gaza, Information Minister Youssef Rizka said he could not confirm or deny reports of Shaer's arrest.

Although the Israeli action was touched off by the soldier's capture, Israeli Prime Minister Ehud Olmert's government has also been alarmed by a surge in the firing of homemade rockets on Israeli communities bordering Gaza.

A militant offshoot of Palestinian President Mahmoud Abbas' Fatah party said it had fired a homemade rocket with a chemical warhead at the southern Israeli town of Sderot late Wednesday, the first such claim. The Israeli military said it did not detect a rocket fired then, and there was no way to verify the claim.

Gaza City is one of the most densely populated cities on the planet and hundreds of thousands of people are living in the dark, reports CBS News correspondent Sheila MacVicar.

As CBS 60 Minutes correspondent Bob Simon reports, the violence is part of the typical pattern of Middle East violence. Simon reports that the kidnapping "is designed to provoke a brutal Israeli response. The Israeli's follow suit with that response. The response invariably radicalizes the population, makes them even more anti-Israeli – creates mores suicide bombers."

Residents said an Israeli Apache helicopter fired a missile at an electrical appliances store near Khan Younis before daybreak. Inside, computers, refrigerators and other appliances were charred, and owner Majid Abu Daqua, 40, said he lost more than $60,000 worth of equipment.

Israel said the shop was used to store and manufacture rockets and other weapons.

Israeli military bulldozers razed several houses and about 25 acres (10 hectares) of land overnight near the Sufa crossing between Israel and Gaza near the southern tip of the coastal strip, residents said.

Farmer Nabil Abu Muammar, 39, an owner of one of the destroyed houses, said residents were warned over loudspeakers Wednesday night to leave the area.

"This morning I returned home and saw my house and my land had been flattened," Abu Muammar said.

The military denied flattening homes or farmland, and it wasn't immediately possible to verify when they were razed.

Israeli parachutes dropped leaflets in and around Khan Younis asking citizens not to obstruct its search mission and to avoid areas where the Israeli military was operating.

No deaths or serious injuries have been reported in any of the attacks since the operation began.

The incursion has focused so far on southern Gaza, where the military thinks Shalit is being held. But the military signaled the prospect of a new front being opened in the northern part of the strip when it dropped leaflets late Wednesday into the area, urging residents to avoid moving in the area because of impending military activity. Security officials said it could take days before a second front was opened.

In the meantime, low-flying helicopters buzzed northern Gaza, and empty fields in the area came under heavy artillery bombardment, including near the Erez crossing with Israel.

Olmert has threatened harsher action to free the soldier, but said there was no plan to reoccupy Gaza, which Israel evacuated last summer.

Abbas and Egyptian dignitaries tried to persuade Syrian President Bashar Assad to use his influence with Hamas' Damascus-based political chief, Khaled Mashaal, to free the soldier. Assad agreed, but without results, said a senior Abbas aide.

In a clear warning to the Syrian president, Israeli airplanes flew over his seaside home near the Mediterranean port city of Latakia in northwestern Syria, military officials confirmed Wednesday night, citing the "direct link" between his government and Hamas. Israeli television reports said four planes were involved in the low-altitude flight, and that Assad was there at the time.

Israeli Justice Minister Haim Ramon said Wednesday that the hard-line Mashaal, who appears to be increasingly at odds with more moderate Hamas politicians in Gaza, was an Israeli assassination target. Israeli spies botched an attempt to assassinate him in Jordan in 1997.

Meanwhile, the Popular Resistance Committees in Gaza, which has strong links to Hamas, said it executed Asheri, kidnapped in the West Bank. An Israeli military official said he was shot in the head shortly after he was abducted Sunday. The PRC had said it would execute the hostage if Israel did not halt its invasion of Gaza.

Government spokesman Asaf Shariv said Asheri's killers would be arrested, and Israel would try to bring them to trial.

"Their days as free people are numbered," Shariv said.

Militants also say they kidnapped another Israeli, a 62-year-old man from the central Israeli city of Rishon Lezion. But police said Thursday they found the man's body in his hometown in Israel, and that he apparently died of medical problems.