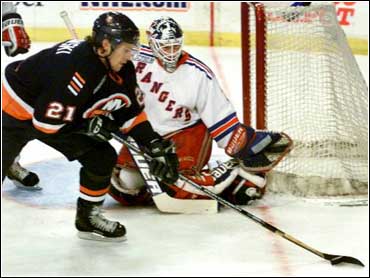 Only one New York team came out ready to play and it wasn't the club fighting for the playoffs.

The New York Islanders, who with 39 points are the NHL's third-worst team, got five points from linemates Jorgen Jonsson and Mariusz Czerkawski to beat the New York Rangers 4-2 Sunday night.

"I think I'm disappointed more than angry," said coach John Muckler, whose Rangers are only three points ahead of ninth-place Buffalo in the Eastern Conference.

"Obviously we felt those were two must points and I think they have a better team than the record shows for," said Rangers center Petr Nedved, who assisted on the game's first goal.

Kevin Weekes stopped 31 shots to beat the Rangers for the fourth time this season, twice since joining the Islanders after being traded from Vancouver.

"Playing at Madison Square Garden and winning, it doesn't get any better than this," Weekes said.

Jonsson, who had three assists, has nine points in three games, one goal and eight assists. The Islanders matched a season high with their third straight victory.

"Since Christmas, he's been getting better and better," Islanders coach Butch Goring said. "He's playing like an All-Star. If you're a winger with this guy, you have to be thrilled to death."

Czerkawski knows that good fortune and had two assists, extending his point-scoring streak to a career best 10 games.

"It's nice to be on his wing right now," Czerkawski said. "He is more comfortable and confident."

The Islanders rebounded from a pair of one-goal deficits and a controversial Rangers score in gaining their 16th victory.

They scored three times in the second period and grabbed the lead with 3:40 left in the frame.

"The second period was probably one of the worst periods we've played all year," Muckler said. "I fear games like this. If you're not prepared when you leave the dressing room, it's hard to switch it on when you get out there."

Jonsson skated around Valeri Kamensky down low and fed Mathieu Biron, who beat Mike Richter from the right side of the net for his fourth goal to make it 3-2.

"Right now I feel great skating," Jonsson said. "I'm not tired out there."

Claude Lapointe scored his 11th goal with 43.8 seconds left into an empty net.

The Rangers took a 1-0 lead in the opening period, on a perfectly executed 3-on-2 by the "Czechmates" line, when Jan Hlavac scored his 14th goal.

Radek Dvorak raced down right wing and moved the puck to Nedved above the circles. Nedved carried down low and backhanded a pass to Hlavac, who steered it into the open left side of the net at 7:37.

Hlavac, who had his first career hat trick Friday night and then became a father on Saturday, has five goals and an assist in five games against the Islanders.

The Islanders tied it 4:18 into the second on Jason Krog's first NHL goal. Czerkawski slid the puck to Jonsson while being dragged down. Jonsson got the puck across to Krog, who scored into the upper left corner.

But the Rangers struck back after just 2:58 passed. Late on a power play, the game and penalty clocks failed to start after a faceoff. The Rangers got 14 extra seconds with a man advantage before the problem was noticed.

As a result, Gino Odjick was just getting out of the penalty box and back into play when Stephane Quintal fired a shot from the point that Weekes kicked out. The rebound came right to Dvorak, who netted his 13th goal.

Goring slammed a stick against the boards to alert the officials of the problem. The goal was allowed to stand and the 14 seconds were then deducted.

The Islanders weren't fazed and tied it 1:04 later. Jonsson won a faceoff and the puck came back to Jamie Heward at the left point. Richter stopped Heward's drive, but Josh Green converted the rebound for his ninth goal.

"The last week or so has been really great," Jonsson said. "Our line likes to move their feet and cycle in the corners."

The Rangers were without Tim Taylor and lost Theo Fleury midway through the second period because of the flu.

Islanders defenseman Eric Cairns was suspended for the game because of a hallway fight Saturday with Pittsburgh's Matthew Barnaby.

"This is fun for me," said Goring, a star from the Islanders' Stanley Cup glory days. "The Islanders always enjoy beating the Rangers regardless of our positions in the standings."