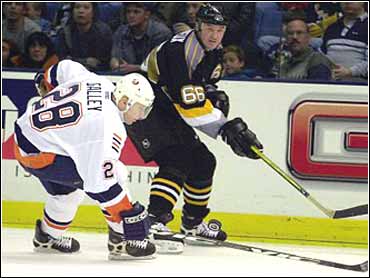 Lemieux played his third road game Saturday and scored twice in front of a rare sellout crowd at Nassau Coliseum. It wasn't enough, as the home fans were treated to a 6-5 New York victory over the Pittsburgh Penguins on a night when the Islanders' glory days were remembered.

"It was great," Lemieux said. "I like to see this building sold out. With a big win for them, it might bring the people back."

Mariusz Czerkawski had two goals and an assist as the Islanders snapped a seven-game losing streak and honored former general manager Bill Torrey, the architect of their Stanley Cup championship teams in the 1980s.

"We knew that tonight would be a very emotional game for us," said Islanders coach Butch Goring, a star on all four Cup winners from 1980-83. "I said to them that there was no way we were leaving this building with a losing streak."

Lemieux had his second two-goal game since ending his 3 1/2-year retirement. Both two-goal games came in the second of back-to-back contests. Opposing teams are taking the body more on Lemieux and are not overwhelmed by being on the ice with him.

"They weren't awestruck my first 12 years, they aren't going to be awestruck now," he said.

Czerkawski gave the Islanders a first-period lead and then registered his other two points in the second in front of just the Islanders' third home sellout this season. He had a hat trick until a postgame scoring change left him with just two goals.

"It doesn't matter if I get three goals or two goals, as long as we win," he said.

Lemieux, who has nine goals and 10 assists since resuming his career last month, scored twice Tuesday night in a loss at Boston, when Bruins forward Andrei ovalenko had three third-period goals.

New York became the first team this season to keep Lemieux from a multipoint game when they held him to one goal in a 4-3 loss Friday at Pittsburgh. He answered goals by Czerkawski in the first period and again in the second to twice lift the Penguins into a tie.

Lemieux's goals came against John Vanbiesbrouck, who has allowed 32 by the Hall of Famer more than any other goalie. Wade Flaherty was New York's goalie in Friday's game at Pittsburgh.

"He's a good goalie," Lemieux said of Vanbiesbrouck. "I've just faced him so many times."

"There's not a bad team in this league," Penguins coach Ivan Hlinka said.

"It was a playoff game for us," Vanbiesbrouck said. "We did everything we had to do."

"The guys I gave the puck to were just burying everything," Connolly said. "Butch told us we were not going to Colorado without a win."

Pittsburgh's Martin Straka had a short-handed goal and a power-play score. Mark Parrish restored New York's two-goal lead with 9:52 left and Jaromir Jagr made it 6-5 with a power-play goal at 17:14 of the third.

Czerkawski made it 1-0 at 7:59 of the first with a back-hander past Jean-Sebastien Aubin, who fell to 2-1 since returning from a 14-game absence because of knee surgery.

Lemieux tied it at 12:28 when he scored on a cross-ice feed from Jagr.

Czerkawski gave New York a 2-1 advantage 1:24 into the second, but Lemieux knotted it again a minute later, when he converted a rebound that hit off the end boards for his 15th goal of the season. Straka gave Pitsburgh a 3-2 lead while teammate Alexei Kovalev was in the penalty box at 6:50, before Dave Scatchard tied it on the power play at 16:00.

Pittsburgh, which outshot New York 33-30, was 2-for-9 on the power play and failed to score during a five-minute advantage in the second.