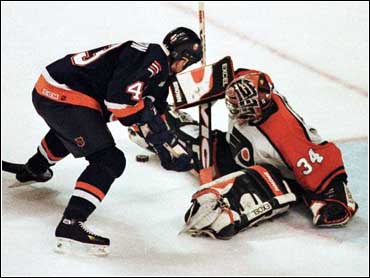 Lawrence, who has three goals in six career games against Philadelphia, scored his first goal this season at 9:16 of the third period to give the New York Islanders a 2-2 tie with the Flyers.

"My wife and I were talking about my success against the Flyers," said Lawrence of his talk with wife Denise. "She told me that it would be funny if I scored again tonight. As it turned out she was right. I really don't know what it is, but I've had some really big goals against them over the years."

Lawrence, who only has 15 goals in 99 career games, tipped the puck past the stick side of John Vanbiesbrouck from the doorstep after taking a pass from Jamie Rivers.

The Islanders shut down the NHL's best power-play unit, blanking the Flyers on seven attempts including 1:49 of a two-man advantage that carried over from the end of the second period into the third.

Jason Krog also scored for the Islanders, who have lost only once in five games (3-1-1) and got an excellent effort from Kevin Weekes, who made 37 saves.

"Weekes played terrific," Islanders coach Butch Goring said. "Our penalty killers and defense did a heck of a job. Whenever Philadelphia was able to get a good shot on net, Weekes was equal to the task."

Eric Lindros and Keith Jones scored for the Flyers, who have lost only two of their last 22 homes games (14-2-6), but ae only 4-6-5 in the second half of the season.

"We've been a lifeless team for a while here," Jones said. "These are teams on paper we should be beating. We need some energy and have to go out and play like the Flyers are supposed to."

An apparent go-ahead goal by Lindros was waved off by referee Paul Devorski, who called a slashing penalty on the Flyers captain with 5:11 left in regulation.

"It's a tough stretch right now," Lindros said. "We got a lead in the third period which is where you want to be and we let that slip away."

With John LeClair off for interference, Krog put the Islanders ahead 1-0 with a power-play goal only 59 seconds in. Josh Green dumped the puck to the crease and Krog tipped it into the net.

Lindros tied it with a short-handed goal at 4:16 of the second, ramming home his own rebound after taking a pass from Luke Richardson deep in Philadelphia's zone.

Jones put Philadelphia ahead 2-1 at 13:24 of the second with his first goal in 15 games. Jones got the shaft of his stick on a Dan McGillis' slap shot, from just inside the blue line, and deflected it past Weekes.

Philadelphia held a 39-26 shots advantage, the 13th time in 14 games that the Flyers have outshot their opponent.

Philadelphia's final power-play came at the start of overtime, but Weekes made a brilliant stop on a shot from the point by Eric Desjardins.

The Islanders are 0-6-2 in their last eight games at Philadelphia.

The game marked the first meeting between the teams since Gino Odjick was traded from the Islanders to the Flyers on Tuesday for Mikael Andersson.