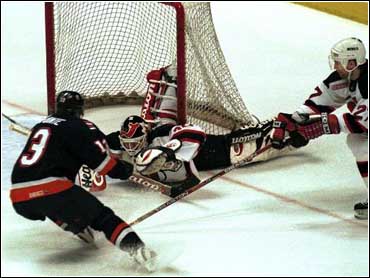 Every so often in this disappointing season, the New York Islanders make a statement to the rest of the NHL.

On Saturday, it came against the New Jersey Devils.

The Islanders, 4-1-1 in the last six games, cooled off the Devils with a 4-2 victory Saturday as Dave Scatchard led the way with two goals. The loss ended a seven-game unbeaten streak for New Jersey.

"We want every team to know that every game will be difficult against us," Scatchard said. "They can't take liberties and they can't take us lightly. That's all it is, earning respect."

Tim Connolly and Josh Green also scored first-period power play goals and Kenny Jonsson had three assists for the Islanders who are playing their best hockey of the season.

Kevin Weekes made 29 saves to extend his unbeaten streak to 3-0-1 in his last four starts.

John Madden and Jason Arnott scored for the Devils who lost for only the second time in their last 16 homes games (13-2-1).

Scatchard opened the scoring at 4:04 of the first period when he deflected a well-timed pass from Jonsson past Martin Brodeur.

"You never want to get down to these guys," Brodeur said. "They've had a lot of success lately and they're feeling pretty good about themselves. To get off to a quick start was a key for their hockey club."

Madden chipped a shot past Weekes at 5:13 to tie the score and set the stage for Connolly and Green.

Connolly banked his goal off Devils defensemen Scott Stevens at 8:06 and the Green scored with just 1.1 seconds remaining.

Arnott's power play slap shot produced the only goal of the second period as the Devils cut the Islanders lead to 3-2. He connected with 1:37 remaining in the period.

Scatchard sealed the win with the only goal of the third period at 12:04.

"There is no question we have not won a lot of hockey games over the course of the year," said Islanders coach Butch Goring. "One of the things we wanted to do was test ourselves in the second half. We felt we could shed the rookie tag for a lot of our guys after the first 40 games. I think they are responding very well."