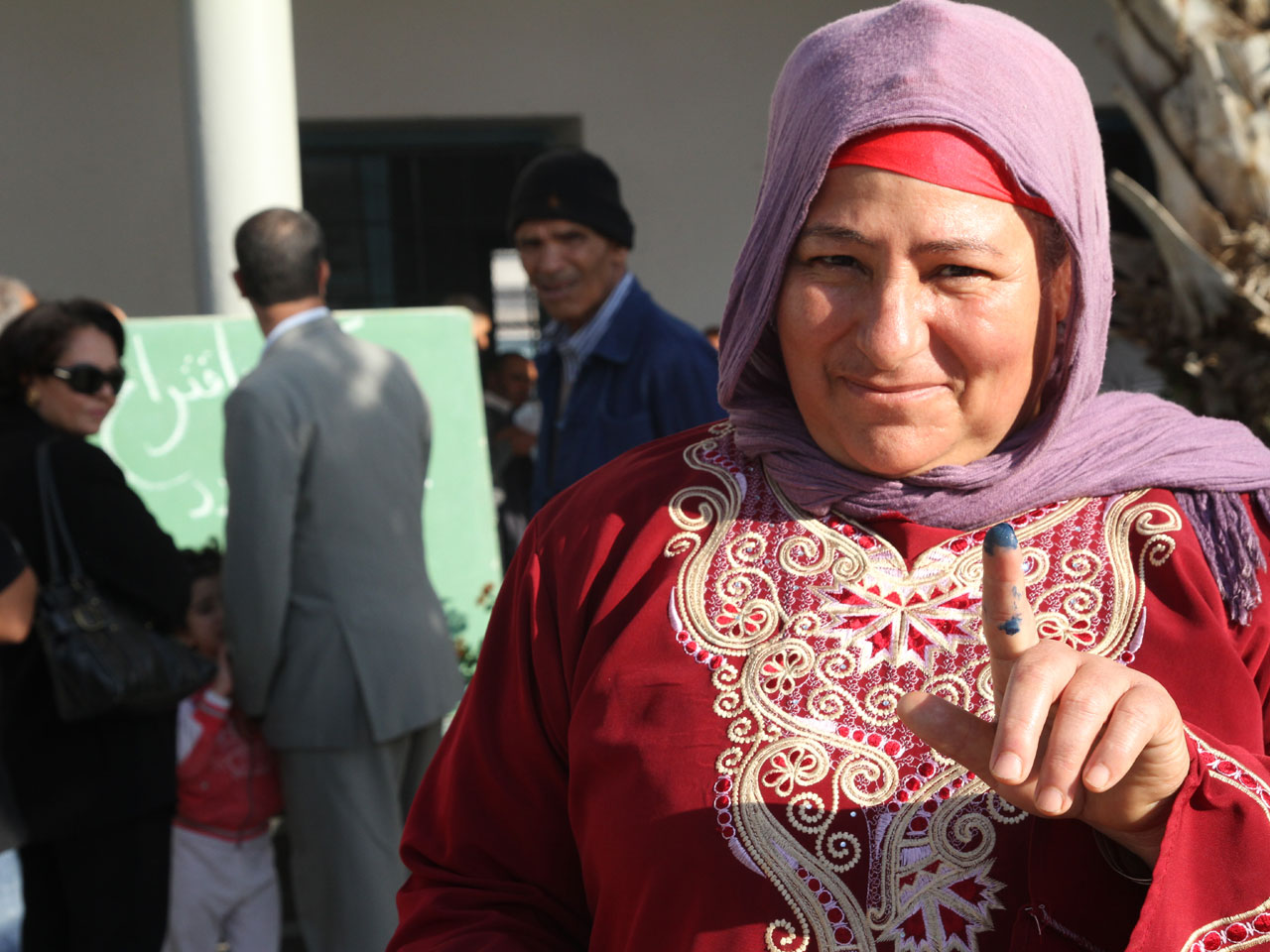 TUNIS, Tunisia - A moderate Islamist party claimed victory Monday in Tunisia's landmark elections as preliminary results indicated it had won the biggest share of votes, assuring it will have a strong say in the future constitution of the country whose popular revolution led to the Arab Spring.

The Ennahda party's success could boost other Islamist parties in the North Africa and the Middle East, although Ennahda insists its approach to sharia, or Islamic law, is consistent with Tunisia's progressive traditions, especially in regards to women's rights.

Party officials estimated Ennahda had taken at least 30 percent of the 217-seat assembly charged with writing a new constitution for the country. Other estimates put the party's share from Sunday's vote closer to 50 percent. Official results are expected Tuesday.

International observers lauded the election as free and fair while emphasizing that the parties in the new government must work together and safeguard the rights of women.

How a slap sparked Tunisia's revolution
A spark lit in Tunisia ignites the world
Complete coverage: Anger in the Arab World

There were no official announcements of domestic results Monday, but Tunisian media outlets posted tallies from individual polling stations, making it clear that Ennahda or Renaissance Party was now the dominant political force in the country, coming in first in nearly every constituency.

Ennahda did take half of the 18 seats reserved for Tunisians living abroad in official preliminary results released Monday. Two center-left parties took seven other seats between them — a distributon of seats expected to replicated domestically.

"Ennahda has taken first place on the national level and at the level of the constituencies," said Abdel Hamid Jelassi, the party's campaign manager at a triumphant press conference outside its headquarters amid cheering supporters.

In the half century since its 1956 independence from France, Tunisia has been practically a one-party state until Tunisians kicked out President Zine El Abidine Ben Ali in January after a monthlong popular uprising. Nine months of unrest, further demonstrations and political wrangling in the country of 10 million preceded Sunday's vote, which saw a huge turnout.

The constituent assembly elected will have an incredibly important role in building Tunisia's new democracy. It will not only appoint a new interim government but write the constitution that will determine how the country will function.

Tunisia's elections coincided with declarations in neighboring Libya by its new leaders that the country has been liberated from the yoke of longtime dictator Muammar Qaddafi. Libya's new leaders also announced plans with a sharply Islamist tone that could rattle their Western backers.

Ennahda says it wants Islamic law, to be the source of the country's legislation, but also insists that the country's progressive personal status code is compatible with its ideals and that it respects all religions and creeds. The party's ability to gain votes by moderating its message in a country with a progressive social history could be a model for Islamist parties elsewhere.

"Islamist groups are learning to play politics in the sense of moderating their message and moving to the center," said Philip Howard, a professor at the University of Washington and the director of the Project on Information Technology and Political Islam. "They start out fundamentalist but then become content to participate in party politics and move to the center, giving up some of their radical politics."

Habib Bourguiba, who led Tunisia to independence, was a staunch secularist, and helped shape what was outwardly one of the more Westernized societies in the region, with a progressive personal status code for women — and harsh repression for Islamists.

When asked why they voted for Ennahda, Tunisians cited everything from protection of Islam to the hope that the party could deliver jobs, to the fact that it once severely repressed by the government.

"Ennahda was never with Ben Ali," said Mohammed Husseini, a taxi driver in Tunis. "All the other politicians benefited from him in one way or another."

The election was widely praised by the different teams of international observers who came to watch the contests, who described as fair with only a few minor violations that had no effect on the outcome.

"This election to me was hands down the best, most promising election I have ever witnessed, including those I have seen in the United States," said Jane Harman, a former nine-term congresswomen from California with the National Democratic Institute's delegation of observers.

She congratulated the Tunisians, then cautioned the apparent winners not to roll back the country's famous achievements for women.

"The world is watching to make certain that the government that emerges respects the rights of women, continues to uphold the family status law in Tunisia — as all the parties pledge to do — and that women play a very meaningful role in the future of the country," she said.

"We encourage the Constituent Assembly to operate in a transparent and inclusive manner as they undertake this new democratic responsibility and fulfill the Tunisian people's aspirations for accountability, wider economic opportunity and respect for universal human rights," she said in a statement.

The one party that was most vociferous in its commitment to protect the status of women from Ennahda did suprisingly poorly in the polls.

The Progressive Democratic Party was one of the only legal opposition parties under Ben Ali. It appears to have faded during the campaign and in a downcast press conference, party officials said they appeared to have come in fourth place.

Party leader Maya Jribi said the PDP still had faith in its center-left ideology and would work in the opposition.

"We are in a democracy, and the minority plays the role of the opposition, and we will do this role in the right way and we will ask the assembly to meet the needs of Tunisians," she said. "We will play a role in the new constitution and assure it has a separation between religion and state."

Next to her, Nejib Chebbi, the party's historic founder, congratulated Ennahda, while stressing that it had a lot to do if it was going to address the country's myriad problems.

"We congratulate the party who won and we wish it good luck in fulfilling its promises to meet the needs and demands of the poor and the unemployed in just the next nine months or a year," he said.

Sayed Ferjani, a member of Ennahda's political bureau, said the party already had been contacted about future coalitions. "We are contact with everybody, even Chebbi (of the PDP) started contacting us on the eve of the election," he said.

After 23 years in power, Ben Ali was overthrown Jan. 14 by a monthlong uprising, sparked by a fruit vendor who set himself on fire to protest police harassment. The uprising was fueled by anger over unemployment, corruption and repression and quickly inspired similar rebellions across the Arab world.

The autocratic rulers of Egypt and Libya have fallen since, but Tunisia is the first country to hold free elections as a result of the upheaval. Egypt's parliamentary election is set for next month.

Tunisia's economy and employment, however, have only gotten worse since Ben Ali fled to Saudi Arabia because tourists and foreign investors have stayed away.