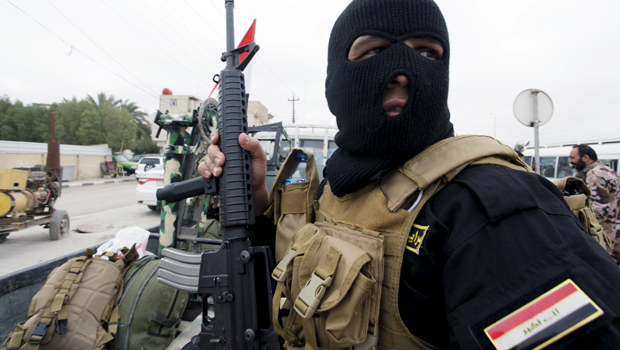 The U.S. will start using airstrikes to help the government of Iraq retake the northern town of Tikrit from the Islamic State of Iraq and Syria, or ISIS, CBS News has learned.

CBS News national security correspondent David Martin reports that the U.S. had been waiting for a public statement from the Iraqis that they had requested the strikes. The U.S. wanted the statement as a tacit admission that the Iranians spearheading the offensive have failed the Iraqis.

The airstrikes mark the first time the U.S.-led coalition fighting ISIS has taken part in a major offensive there.

Pentagon spokesman Col. Steve Warren said Tuesday that the Iraqi ground operation against ISIS has "stalled" and that the Tikrit operation "has not moved forward recently."

"They certainly have not given up," he added. "I think the difference is, after you've been static for about a week you're stalled."

Martin reports that the hope of the U.S. is that the bombings will not only tip the scales in Tikrit but serve as a teaching moment that the Iranians are not reliable partners.

Up to now the offensive to take back Tikrit, Saddam Hussein's hometown, has largely has been waged by Iraqi troops and Shiite militias advised by Gen. Qassem Soleimani, commander of the elite Quds Force of Iran's Revolutionary Guard.

Both the U.S. and Iran view ISIS as a major threat but insist they are not coordinating their actions. The U.S. had previously said it was not taking part in the Tikrit offensive because it had received no request to do so from Baghdad.

The U.S.-led air campaign, launched in August, has allowed Iraqi forces to halt ISIS' advance and claw back some of the territory it seized last summer.

But the growing Iranian presence on the ground has complicated the mission, with Washington refusing to work directly with a country it views as a regional menace. The prominent role of the Shiite militias in the fight to retake Tikrit and other parts of Iraq's Sunni heartland has meanwhile raised concerns that the offensive could deepen the country's sectarian divide and drive Sunnis into the arms of ISIS.

A senior Iraqi military official told The Associated Press that Soleimani had just left Tikrit after providing front-line assistance and advising since the start of the operation.

"He will come back if we need him to," said the Iraqi official, who spoke on condition of anonymity because he's not authorized to brief journalists.

Iran has provided military advisers and weapons to Iraqi troops and Shiite militias, and last year it carried out airstrikes near its border in Iraq's Diyala province.

The Sunni city of Tikrit lies about 80 miles north of Baghdad. It is one of the largest cities held by ISIS and lies on the road connecting Baghdad to militant-held Mosul, the country's second-largest city.

U.S. military officials have that said a coordinated mission to retake Mosul likely will begin in April or May and involve up to 25,000 Iraqi troops. But the Americans have cautioned that if the Iraqis are not ready, the offensive could be delayed. The U.S. and other coalition members have been providing weapons and training to Iraqi and Kurdish forces in the north in an effort to prepare them for the battle ahead.

The Tikrit operation is the largest to date and requires careful air and ground coordination in order to minimize civilian casualties and damage to the city's infrastructure.

Iraqi security forces and allied militias surrounded Tikrit and entered some northern and southern neighborhoods earlier this month. But the offensive has since been hindered by roadside bombs and snipers, and Iraqi officials say they will not rush a final assault.

Iraqi forces have made progress in driving ISIS out of rural areas and small villages, but populated areas like Tikrit could prove a greater challenge.

"Urban combat is exceedingly difficult combat, and the Iraqis are seeing that," Warren said.