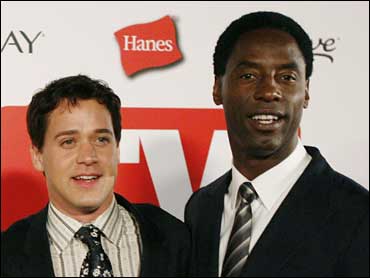 Former "Grey's Anatomy" star Isaiah Washington says T.R. Knight should have lost his job after the two became embroiled in controversy over an anti-gay remark made on the set of the hit show earlier this year.

"They fired the wrong guy," Washington tells the Houston Chronicle in a new interview from the set of his upcoming film "The Least Of These," in which he plays a priest.

The actor says he is considering taking legal action. He told the newspaper he has to clear his name.

"My livelihood, my honor and dignity and my name have been so challenged," he says.

Washington was fired from the show after he used an anti-gay slur at a Golden Globes press conference in January as the cast was accepting the award for best drama. Prior to that there were reports that Washington called Knight the anti-gay slur during an argument with costar Patrick Dempsey.

The fallen TV star tells the newspaper that his costar T.R. Knight stirred up talk that the slur was directed at him and created a negative work environment. Washington alleges that Knight likely wanted a salary increase and a more substantive role on the show.

Knight, who came out after the incident made headlines, said on Ellen DeGeneres' talk show that the slur was directed at him.

"That's a lie," Washington says. "I used the word during a disagreement with Patrick. I apologized for that. We shook hands and went back to work."

Washington says he was not fired for using homophobic slurs. He said the phone call from showrunner Shonda Rhimes in which she said he would not be coming back next season was a shock.

"I did everything they told me to do, including not saying anything, and then they didn't renew my contract. That's not fair," he says.

Washington tells the newspaper that he made three errors in judgment: "believing the cast of 'Grey's Anatomy' were like family; believing I had the freedom to express myself with family and that we could resolve our issues; and trusting ABC was going to take care of me … I'm not angry. I'm disappointed."

The network declined to comment to the Houston Chronicle about the story.