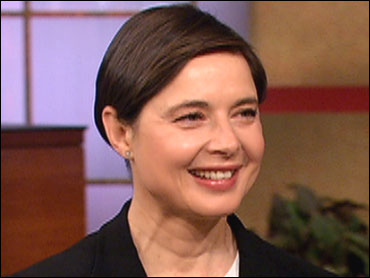 Famed Italian movie director Roberto Rossellini would have turned 100 years old on Monday, May 8. To pay tribute to her father's memory, actress Isabella Rossellini appeared on The Early Show to talk about her new short film and book.

Rossellini not only wrote and narrated the 17-minute film, titled "My Dad is 100 Years Old," she also played many of the people who were close to him, including her own mother, Hollywood icon Ingrid Bergman.

"It's a short film, but it was really conceived to present my father's film, touring in museums but also showing on cable television," Rossellini told co-anchor Hannah Storm.

As a child Rossellini says she curled up on her father's big belly — he was a big man — and in the movie, he is also represented as a big belly.

"Yes. My father used to say 'Oh, I envy women so much. I wish I could be pregnant. I wish I could carry babies,'" Rossellini remembers. "He was a very tender, maternal father I would say."

But besides showing affection for her father, Rossellini says she also made the film to raise awareness of film preservation.

"I think I wanted to bring attention to the fact that films should be conserved and restored. It is the art that we love the most and everybody sees films more than we read books. Like I have a little boy who doesn't really read books but watches a lot of films, and yet we don't have the infrastructure yet that museums have or arts, or culture for paintings," she explains. "So I've used my father, who is a very well-known director but whose film is deteriorating and needs to be restored and needs to be put together and preserved, to call attention to film preservation."

Rossellini says she doesn't think expense is the reason why films aren't being restored. "I think there is new technology that doesn't make it so expensive. It's more that we never thought about it. You know, film was not going to deteriorate. And we found out that yes, indeed, it deteriorates. We have to find technology to restore it and most of all to conserve it," she says. "My father would have ultimately a fantastic exhibit at MoMA, the Museum of Modern Art in New York, in November and December."

In her short film, Rossellini not only plays the roles of five men but also her own mother. While she initially was not worried about playing her mother, she admits the process was very moving.

"You know, it was funny, because I was a little bit intimidated of playing five men. I decided to play all the characters, because it was all the voices in my head as I grew up with all these people talking about film, and the importance of cinema. So I voiced them all through me, not to be a documentary, but to explain what is in my head. The least worried was about my mother. Because I was told that I look like her," Rossellini explains. "Then when I played me talking to my momma appearing on this big screen, I got very moved. And everybody did on the set."

The actress also wrote a book, titled, "In The Name Of The Father, The Daughter And The Holy Spirit," which comes with the DVD. In it, she writes about growing up with her famous parents.

What does she tell people when they ask about her childhood?

"I generally tell them I never had any other parents so it's very hard to answer. But in my book, there is not only my memory as a daughter, and how it is, I mean obviously I want my father to be remembered, because I'm a daughter loving his dad. But how do I draw the line that my parents were historically important in the arts? That you have to preserve their work, and so it's that conflict, but often the book is writing about my dad, that my mom did, so it's an ensemble of writing to bring — my dad was always been written by historian and critics in a very academic way. He's an artist's artist. He's a filmmaker who might not have been very popular for the masses," Rossellini explains.

Commercially, he may not have had a huge impact, but Rossellini says her father is "incredibly important for other artists. His influence was very strong. And I wanted to do a light book of images."