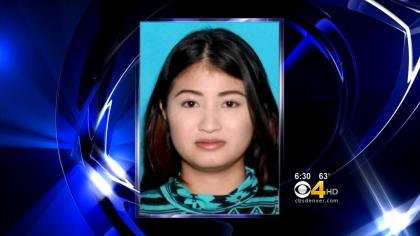 The station reports Guzman is not formally being held for homicide, however police previously had described her as a suspect in the case.

Guzman was reportedly detained after authorities observed her walking out of a parking garage around 11:30 a.m. Thursday. That's where officers found a car with items believed to be related to the woman's death, according to the station.

Prior to Guzman's capture, her father, who is the ex-husband of the slain woman, begged for his daughter to turn herself in.

"I know you've got to be scared but it's the best thing for you to do," said Robert Guzman.

Officers said they received a 911 call reporting a family dispute that turned deadly around 10:00 p.m. Wednesday. When they arrived at the home, they found a man at the door who said there was a woman upstairs who needed help, the station reports. The woman, who had not been identified by name, was pronounced dead at the scene soon afterwards.

Robert Guzman told the station his ex-wife had been concerned about Isabella's behavior.

"She came here yesterday to seek help with Isabella. She wanted me to go and talk to Isabella and she was really scared," he said.