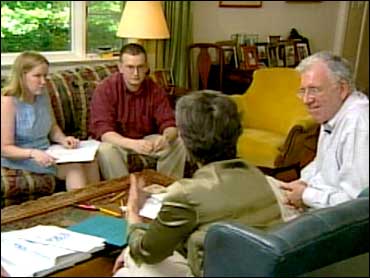 If there were a test to see how strong your marriage would be before you actually tied the knot, would you take it? CBS News Correspondent Tracy Smith gives the details about a test that aims to make such a prediction.

On that most romantic of days, it's hard to imagine that the blessed union of marriage could end badly. But, it happens. The United States' divorce rate is still one of the highest in the world.

"The fact of the matter is we are failing in half of our new marriages and the society has to pick up the cost," says Mike McManus, founder of Marriage Savers -- a program to iron out couples' problems. "You and I have to pay more taxes as a result of the failures of these relationships."

So, in a move to promote domestic tranquility, the president has proposed a $1.5 billion Healthy Marriage Initiative. The proposal, which the White House developed in close consultation with conservative groups, ties the concept of healthier marriages to reducing drug use and other problems. Groups opposed to the program contend it could discriminate against single women, pressure some into abusive marriages and convey that they should find a husband rather than seek self-sufficiency.

The initiative is part of welfare reform legislation stalled in the Senate, however some pilot programs have already received funding.

But, is marital happiness something you can teach?

The answer is: you can try. Mike and Harriet McManus, who have been married for more than two decades, run Marriage Savers. Their program costs less than $20 a couple. The goal of the government funding is to make programs like theirs affordable to lovebirds all over the country.

"The one recurring problem is listening," says Harriet McManus. "People do not know how to listen. They think communication is talking.

To learn how to listen, couples go through an exercise guaranteed to get their attention.

Couples in the class take a test. It's really more of an inventory because the couples don't get graded. It's not even pass/fail. The survey gives the McManuses an indication of all of the "growth issues" couples may have to work on to have a healthy marriage.

The test brings up issues a couple might never have thought of, such as little habits that might annoy the other person; if a potential spouse puts too much emphasis on physical appearance; or even if one of them is using sex to control the relationship.

There's no possibility of collaborating on answers because couples take the test separately. At more than 200 questions, the test is a whopper. It is designed to sort committed couples from wedding wannabes.

Mike and Harriet McManus say they have mentored 50 couples and nine have decided not to marry. In their view, however, it's better to have nine fewer weddings than nine more divorces. And of the 41 couples who did decide to marry, all are still together.

After a couple finishes the test, they each have to acknowledge --in so many words -- that they really heard what the other was saying.

"Normally, half of married couples, in their first year, have conflicts that stun them," says Mike McManus. "They didn't realize they had these issues and they begin thinking about divorce right away."

The McManuses and others are trying to get churches of all denominations to make programs like Marriage Savers a requirement before taking a walk down the aisle. In most cases, the sessions take a few weeks. And if the issues don't get resolved, the couple might be asked to at least postpone the wedding.

But do conflicts stop after marriage? And, is there a test for married couples?

The answers are: no to the former and yes to the latter.

Tracy Smith and her Early Show producer husband, John D'Amelio, were wed in 1993. They took the Marriage Savers test last week. When it was time to see how they did, the results were mixed. For example, the test asked if Smith's husband discounted her feelings.

"I said, 'I think he discounts my feelings'," says Smith.

"I disagreed," says D'Amelio. "I don't think she ever discounts my feelings."

"You don't think I do? That's nice," responds Smith.

"No? Why?" asks Harriet McManus.

D'Amelio laughs, "Because the camera's rolling."

Mike McManus says marriage can end happily ever after, but it can't be taught.

"You teach the tools to resolve conflict that will lead to happily ever after," Mike McManus explains.

Smith and D'Amelio disagreed on about half of the marriage questions. But, the McManuses say that's actually a good score.

"I'm not shopping for a divorce lawyer just yet," says Smith.