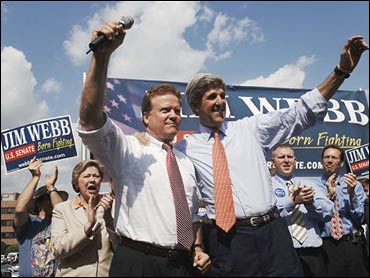 This story was written by CBS News' Ward Sloane and Steve Chaggaris.


Sen. Chuck Schumer, Chairman of the Democratic Senatorial Campaign Committee (DSCC), says everything is looking up for the minority party. That's because Democrats now have candidates with what he calls "winnability." And that's all their voters want.

"The Democrats want to win," he repeated over and over again at a "pen and pad" briefing for reporters on Wednesday. "That's what I see, that's what voters want. They want change, original candidates."

Schumer did not offer any specific polling numbers or facts to support this, but couldn't repeat "want to win" enough times.

"Democrats are tired of losing," he says. "The days when Democrats have to check off 17 boxes before they can get our support are over."

Witness Schumer and the Committee's unusual early endorsement of James Webb in Tuesday's Virginia's primary. Webb, a former Republican who served as Ronald Reagan's Secretary of the Navy, got the endorsement earlier this month because, in Schumer's view, he can beat incumbent Sen. George Allen.

With Webb's nomination, Schumer now says the Democrats have "the candidate we want" in eight Senate seats where they think the Republicans can be beaten (Republicans are defending a total of 15 seats). Those are: