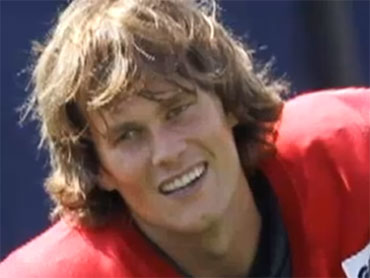 It's something almost every man fears - going bald. And balding doesn't spare the rich and famous. So when picture-perfect New England Patriots quarterback Tom Brady started growing his hair out, people started buzzing about whether or not he was doing it to hide that he was losing his precious locks.

With chiseled good looks, supermodel wife Gisele Bundchen and a $72 million contract, Brady appears to have it all. But while the Patriot's main man is leading a winning football team, he might be losing something important: his hair.

Brady's famous head of hair has been growing out of control the past few months - even teen sensation Justin Bieber trash talked him in a recent rap, saying, "Hello, Mr. Brady, Tell him leave his hair to the guy who sings 'Baby.'"

But is his new "do" a fashion statement - or are his luscious locks hiding his hair loss?

How to Know It's Time to Dump Your Doctor

Dr. Robert M. Bernstein, clinical professor of Dermatology at Columbia University, told CBS News, "It looks like Tom Brady is starting to comb his hair forward and he has some recession in his temples, so those are kinds of signs that he starting to lose his hair."

And if Tom Brady is in fact "folically challenged," he has plenty of company. By middle age, "Early Show" co-anchor Erica Hill reported, about 50 percent of men experience hair loss. And there are plenty of receding hair lines in Hollywood to comb through for advice. John Travolta is rumored to wear a hair piece, while Bruce Willis and tennis great Andre Agassi fully embrace their losses with clean-shaven heads. But for younger guys, like Prince William - only 28 and thinning - a bald head might not be the best bet.

Dan Pesa, editor in chief of Details magazine, said, "At least hold on to what you have. And if you don't want to fight it, don't walk around like a cue ball. Most men don't look good without any hair."

Luckily, Hill joked, the famous quarterback has another option.

Pesa said, "I honestly think if Tom Brady is going bald, he should just wear his helmet year round."

Hill said, "So cheer up guys, turns out Tom Brady may not be perfect after all."