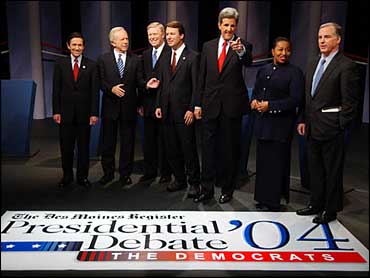 The great Bob Newhart used to do a hilarious sketch about the way tobacco was introduced to the West: "You roll it up in paper, and then what? You stick it your mouth? And set fire to it?"

Well, here in Britain, we are just as puzzled by your system of electing Presidents. OK. There are two main political parties, Republicans and Democrats. And the Republican guy is running again. Understood. But the Democrats haven't got a candidate yet? And the election's in November? You're kidding. Nine people want the job. Nine? And all nine are going round the country spending zillions trying to get picked.

Over here, we've also got two big political parties. The Labour Party is led by Tony Blair. But he didn't have to face the indignity of the primaries, let alone the expense. He simply had to win one big vote of most Labour party members, and the controlling votes of the big trade unions which pay a fat chunk of all Labour party bills.

The other party is called The Conservative Party. And they've developed a humdinger of a way of picking their man. They used to let their own paid-up members have the final say. Conservative legislators would thrash out a short-list of two and then leave it to the rabble to decide. This proved a democratic disaster, because ordinary members of the Conservative party have a suicidal tendency to select complete dumb-brain losers.

Eventually the Conservatives realised it. So a few of them got together and suddenly: BANG - his reign was over, faster than a Britney Spears marriage. They then reckoned they'd save everyone a heck of a lot of agony by saying what a nice guy Michael Howard was and nominating him - alone. No primaries. No cost. Not even a single vote. Isn't democracy great?

So we'll be watching your long and gruelling primary season with great interest -- and total incredulity.