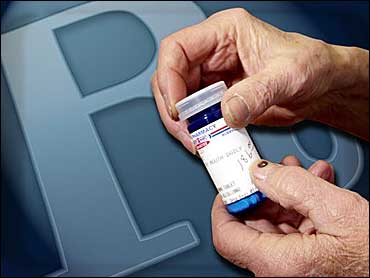 If you have a condition and hear about a new drug to treat it, bring it up with your physician, advises The Early Show's Dr. Mallika Marshall. There are many new drugs on the market targeted specifically at women. Many of these newer drugs are more effective than the older drugs they are designed to replace. However, it's important to remember that these drugs like all others do have potential side effects.

If you have a condition such as osteoporosis and hear bout a new drug, bring it up with your physician. That's what your doctor is there for. We're constantly bombarded with ads on television or in magazines about new drugs making wonderful claims. But the truth is, some of the drugs out there may be for you, others may not, and you should feel comfortable asking your doctor whether you should be trying something new. If your doctor hasn't heard of the new medicine, they can look it up and get back to you.

Here are some new drugs to treat the following conditions.

MIGRAINES
There is a fairly new medication called eletriptan or Relpax. It belongs to a popular class of migraine drugs called triptans which can narrow blood vessels that supply blood to the brain and help relieve pain and nausea. This drug is taken as a pill and works quickly, usually relieving symptoms within an hour or two. Side effects can include dizziness and flushing.

FERTILITY
Bravelle (or Fertinex) is a drug that's used to increase a woman's fertility. It's a purified form of a reproductive hormone that's found naturally in a woman's body, called FSH. It's given by injection and it stimulates a woman's ovaries to developed mature follicles or eggs. It, like other similar medications, is commonly used by fertility doctors to treat women for infertility. Side effects include headaches and bloating, and it can result in multiple births.

DEPRESSION
Lexapro is a newer type of SSRI, medications commonly used to treat depression, which increase the serotonin levels in the blood that help improve mood. It's similar to Celexa, but is a more purified form, so it's thought to have fewer side effects. It can cause headache and stomach upset.

ROSACEA
Rosacea is a condition that affects people over 30 and causes red blotches and a pimply appearance on the cheeks and nose. There's a new gel available called Finacea which can be applied directly to the affected areas. It tends to last longer than older treatments and works better. It can also be worn under make-up. It can cause some burning and itching.

OSTEOPOROSIS
Forteo is a synthetic hormone, which, unlike other osteoporosis treatments that try to prevent further bone loss, can actually stimulate new bone growth. Studies have shown it to be very effective at improving bone density and preventing fractures, but it's somewhat controversial because some studies found that it caused a rare but malignant bone tumor in rats. This hasn't been shown in humans, though.

PSORIASIS
Psoriasis is a common skin disorder that causes itchy scaly pink patches. A new drug called in Amevive is given by injection and works by suppressing the immune system, which is thought to be responsible for the condition. One benefit is that the effects can last up to a year after a 3-month regimen and people report few side effects.

IRRITABLE BOWEL SYNDROME
Zelnorm is a drug which was originally prescribed for women with irritable bowel syndrome who suffered mostly from constipation, but now it's being used to treat chronic constipation in people under 65, men and women. It's very effective at relieving pain and bloating, though some people complain of diarrhea and nausea.