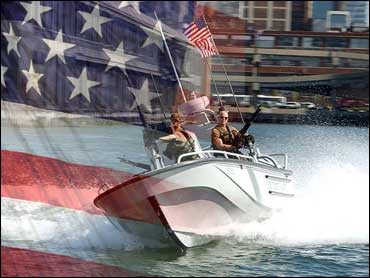 It's the nuclear equivalent of boxcutters. No atom-splitting required. It's called a "dirty bomb," assembled from TNT and radioactive material.

Elite scientific SWAT teams stand ready for larger nuclear attacks, but their plans, conceived during the Cold War and refined before Sept. 11, were not made to guard against a small bomb in a backpack or a truck.

To address such a terrorist threat, experts say, more needs to be done — from tighter security at hospitals and labs handling radioactive ingredients to better sensors and tracking at U.S. ports and borders.

"It's a particularly worrisome threat," said Bruce G. Blair, president of the Center for Defense Information, a Washington think tank. "It's less hypothetical than them acquiring a regular nuclear bomb."

Federal authorities say Osama bin Laden has tried several times since at least 1992 to obtain components of nuclear weapons. In October, he was quoted in a Pakistani newspaper as saying, "We have the weapons as a deterrent." Documents seized in terrorist safe houses in Afghanistan showed instructions on how to make various devices.

Unlike the devastation caused by a nuclear weapon - which might kill 100,000 in lower Manhattan - damage by a conventional bomb used to scatter radioactive dust would be limited to a few square blocks, according to the congressionally chartered National Council on Radiation Protection.

Those uninjured by the blast but near enough to absorb or swallow the dust or otherwise be exposed to the radioactivity would face an increased risk of premature cancers and other diseases.

Mostly, though, a dirty bomb "would create a nuclear panic," said Amy Sands of the Monterey Institute of International Studies in California.

"There is a psychological dimension related to anything nuclear," she said, "and terrorists would be exploiting that fear."

In the event of a dirty bomb explosion, many people would be safe by staying indoors with the ventilation system turned off until investigators had given the all-clear.

Blair said that if law enforcement had a warning about a dirty bomb, "it could be 10 times easier to find than a nuclear weapon because it won't be shielded as well."

And it wouldn't be hard for nuclear emergency teams to disarm a dirty bomb, a simple explosive with a detonator.

However, Blair said, "Intelligence is key. If they are out there looking randomly, they stand a pretty slim chance of picking up a well-smuggled device."

The Department of Energy's Nuclear Emergency Search Teams - 1,000 members strong - are trained to find and disable nuclear devices. Normally, NEST remains on standby at national labs and two federal locations in Nevada and Washington, D.C. Typicaly, they sweep targets enticing to terrorists such as the World Trade Organization meeting in Seattle in 1999.

DOE declined to discuss whether NEST is routinely monitoring places like Lower Manhattan for radioactive materials, or if it will be deployed at events like the Super Bowl in New Orleans or the Winter Olympics in Salt Lake City.

If a small radioactive bomb were detonated, NEST forces would descend, as well as specially trained teams from the military, the Environmental Protection Agency, law enforcement and trauma hospitals.

People would be tested for radioactive exposure. Medical treatment for those exposed would be limited: blood transfusions, antibiotics and hormones would be given to stimulate damaged immune systems.

In most cases, the radiation council says, people's fears would be far greater than the actual danger, and first-responders should carry monitoring devices to immediately determine the extent of contamination.

"A radiological assessment or decontamination should never take precedence over dealing immediately with life-threatening initial injuries such as shock, compound fractures and bleeding wounds," the NCRP stresses in a new report, "Management of Terrorist Events Involving Radioactive Material."

Council president Charles Meinhold said radioactive particles would spread beyond the actual blast area. But the limited release is something that public safety agencies are trained to contain and clean up.

Since Sept. 11, the Nuclear Regulatory Commission has been concerned about an airplane attack on a nuclear plant. With that in mind, it reversed a long-standing policy and allocated $800,000 to buy millions of potassium iodide, or KI, pills.

But the pills would be useless against the most likely forms of dirty bombs that would use weaker radioactive materials and don't rely on atomic fission that produces radioactive iodine.

Those are materials that would be easier for terrorists to obtain.

Since 1986, the NRC has recorded over 1,700 instances in which radioactive materials have been lost or stolen.

Internationally, there is a thriving black market in radioactive substances. In November, authorities in Istanbul arrested two men for trying to sell enriched uranium suitable for use in a nuclear weapon for $750,000. The men said they bought it from an unidentified Russian.

"They were barely aware of what they were selling. They only knew it was a very expensive substance and wanted to make money," a Turkish police official said.

In the past eight years, the U.N.'s International Atomic Energy Agency in Vienna has documented 37examples of illicit sales of nuclear wastes and radioactive materials, including 175 in former Soviet territories.

"Nuclear waste there is simply not guarded with any seriousness," Blair said. "They just try to hide the stuff."

In 1993, operatives for bin Laden in Sudan tried and failed to buy enriched uranium produced in South Africa on the black market.

In the United States, customs officials are on the lookout for efforts to smuggle radioactive materials. They use handheld sensors to scan thousands of vehicles and cargo containers daily. But few are searched intensively.

"We need to get a much better handle on the vulnerability of our ports," said Sands, formerly with the U.S. Arms Control and Disarmament Agency. "We need better sensors and better tracking. We need to close down that option."

Dirty bombs are not entirely new. Iraq tested a crude radiological device in 1987, according to frequently cited intelligence reports

In 1995, Islamic rebels from Chechnya buried - but did not detonate - a 30-pound box of cesium 137 and dynamite near the entrance of a busy Moscow park.

Nor would its effects be entirely unanticipated.

One of the most recent examples of radiation exposure comes not from an attack, but an unfortunate incident in Goiania, Brazil.

In 1987, scraphunters pried open a canister of cesium-137 from an abandoned clinic. For fun, adults and children in a poor neighborhood rubbed the luminous blue powder on their bodies.

Within days, four people died and 244 became ill. More than 34,000 residents were tested. Cleanup workers leveled 85 homes. Information on cancer rates in Goiania since then were unavailable.

By Joseph B. Verrengia
© MMI The Associated Press. All Rights Reserved. This material may not be published, broadcast, rewritten, or redistributed