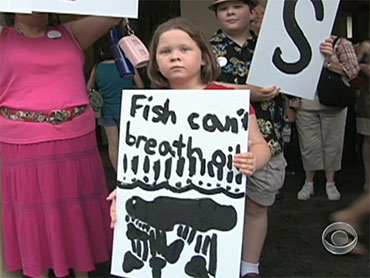 Not the president of the United States. Not the chief executive of BP. Not Congress, federal agencies or local elected officials. From its fiery beginning, the Gulf oil spill has stood as a concentrated reminder of why, over four decades, Americans have lost faith in nearly every national institution.

Like Hurricane Katrina, a natural disaster that caused voters to question then-President George W. Bush's credibility, the poisonous geyser at the Gulf's floor threatens to undermine Barack Obama's presidency. More alarmingly, the spill exacerbates the worry that this nation founded on the principle of trust now faces a crisis of faith in its public and private institutions, government and big business particularly.

"This spill, it's another blow to the body politic," says John Baick, professor of history at Western New England College in Springfield, Mass. It is, he says, another excuse to be cynical and uninvolved "exactly the opposite of what has always been the American zeitgeist, a sense that we, collectively and through our institutions, can be something greater than ourselves."

It's hard to summon that rising-sun aspiration when the unemployment rate hovers near double digits. When wars in Afghanistan and Iraq continue unabated. When terrorists take aim from inside and outside U.S. borders. When the U.S. Treasury writes massive IOUs to China and public schools write off millions of poorly educated children.

Then along comes the oil spill to remind people of why they don't trust leaders - and why so many Americans, looking for information and action, are turning instead to blogs, Twitter feeds and their friends.

Consider this revealing scene: With reddish-brown oil globs washing ashore at Fort Morgan, Ala., Faith Kaiser and Bertice McPherson decided to do what generations of Americans have done when government can't or won't tackle a big problem: They handled it themselves.

Before paid cleanup crews started work, the volunteers pulled on rubber gloves and picked up the gooey mess. As they did so, Kaiser said this: "Six months from now the government will lie to us and say everything is fine."

How did we get to this point where people EXPECT their government to lie to them? And what does it say about where we're headed?

At the 1787 Constitutional Convention, Benjamin Franklin famously observed that he had been trying to determine throughout the debate whether a sun painted on George Washington's chair was rising or setting. "But now at length," he said, "I have the happiness to know that it is a rising and not a setting sun."

And with that, the Founders created a nation upon the fundamental principle of trust. They had an untested belief in the ability of people to lead themselves to choose leaders from their own ranks and to hold those leaders accountable.

Even our currency, once backed by the promise of precious metal, is today built upon a faith-based system called "fiat" a Latin term meaning "let it be done."

In a dictatorship, people can lose faith in institutions and the apparatus of state can step in. But democracy can't survive without faith in its institutions because the people, by definition, create and control them.

While there were surely crises of faith during the Civil War, the Progressive Era and others times of tumult, the early 20th century was marked by a reflexive sense of trust in the nation's institutions. Even as Franklin Roosevelt's New Deal vastly expanded the government safety net, a new breed of private charities and social reformers didn't bother waiting on government to help the poor, infirm and abused.

But things started to change in the mid-20th century, when polls showed a steady decline on the question of whether Americans trusted government in Washington to do what is right.

From 1958, when more than 70 percent said they trusted government most or all of the time, the trend line steadily drops until it hits the mid-20s in the post-Watergate era.

The trust line creeps up for a few years without getting nowhere near the 1958 mark and plunges again in 1994, the year President Bill Clinton's political faltering caused Democrats to lose control of Congress after more than 40 years in power.

Just two months ago, a Pew Research Center poll showed that only 22 percent of the public say they can trust the government in Washington always or most of the time, among the lowest measures in a half a century.

"This spill has just got to make matters worse," said Pew pollster Andy Kohut. "People are asking, Who's in charge? Why can't they plug it? What going on here?"

Just 25 percent of the public has a favorable opinion of Congress. Favorability ratings also have fallen significantly for seven of 13 federal agencies included in the Pew survey, including the Environmental Protection Agency.

Faith in institutions across the board has fallen since the 1970s, at least among the sample of institutions tracked by Gallup: churches, the U.S. Supreme Court, banks, public schools, newspapers, Congress and organized labor.

One of the least-trusted institutions is big business, no surprise after corporate wrongdoing and lax government oversight combined to help create the worst economic crisis since the Great Depression. Sixteen percent of Americans said they had a "great deal" or "quite a lot" of confidence in big corporations in 2009, compared to 32 percent 30 years prior.

The only exception to this trend is the military, which has increased from a 54 percent favorability rating in the post-Vietnam era to 82 percent this year.

Part of the problem: Americans today might expect too much of government and other institutions. Take the oil spill, for example. Accidents happen and, right or wrong, the government is not in the drilling or drill-capping business.

"On a psychological level, people are less likely to take responsibility for things these days," said Lou Manza, professor of psychology at Lebanon Valley College in Annville, Pa. "So if something goes wrong, it's somebody else's fault and somebody has to fix it."

"I take responsibility. It is my job to make sure that everything is done to shut this down," Barack Obama declared a few days ago.

In the same news conference, Obama also acknowledged his administration could have done better in dealing with the biggest oil spill in the nation's history and misjudged the industry's ability to cope with a worst-case scenario. It was a new twist for the U.S. presidency, an office normally filled by men who accept responsibility or admit fault only grudgingly.

Obama may be recognizing that accountability breeds trust.

Less than two years removed from an election victory built on his promise to fix Washington's broken institutions, Obama now seems a captive of them. His administration's regulators cozied up to the oil industry before the spill and moved slowly afterward to seize control. The president himself often seemed detached.

Who else dropped the ball?

BP and its chief executive, Tony Hayward. As his company's oil filled up the Gulf, he had the audacity to complain that "I'd like my life back."

The Minerals Management Service, the regulatory agency that failed to clean up its act despite Obama's promise during the campaign to end the "cozy relationship" between the oil industry and federal regulators.

Even the Coast Guard the one agency that survived Katrina with its image enhanced is now being criticized for its lack of transparency and command.

And the public stews. Listen to Billy Nugesser, president of the coastal Plaquemines Parish: "We are dying a slow death here."

The public's unconditional faith in national institutions is dying, too.

We can't buy a "Shrek" drinking glass at McDonald's because it might be laced with cadmium. We can't talk about the Catholic church without wondering whether something untoward might be afoot. We can't watch a home run without wondering if our pro-ballplayer heroes are juiced.

Which may be why an umpire's blown call denying a rookie pitcher a historic "perfect game" became a viral story this week. Americans saw in the umpire's apology and the pitcher's gracious acceptance a sign that one of their institutions the made-by-America game of baseball still includes leaders who do the right thing even when the situation is less than perfect.

From their government, Americans don't expect perfection. But the system requires that people at least have faith in their political leaders to be competent and accountable.

They will turn away from government a government of the people and by the people who must fundamentally believe that their leaders are, in the end, for the people.