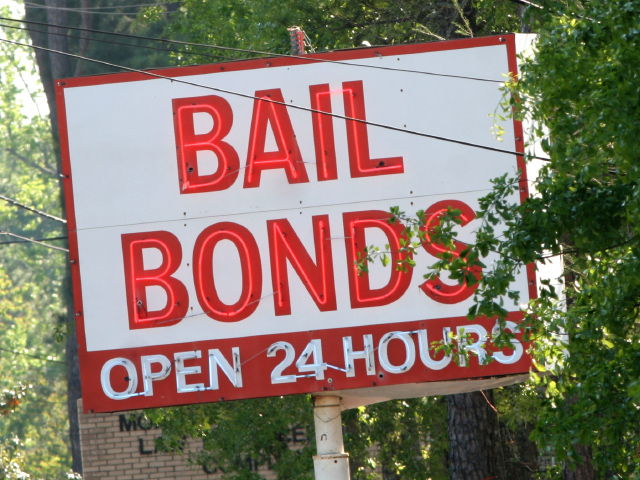 Comments by a top judge in New York have reignited a debate over whether the bail system in the United States should be reformed or replaced.

On Tuesday, Judge Jonathan Lippman said the bail system in New York is unfair to the poor, because they often cannot post bail and thus remain behind bars until their court date - even if their alleged offenses are relatively minor. The system as it now stands, he said, "strips our justice system of its credibility."

Bail works like this: Let's say you are arrested for a crime and taken to jail. Your next major step is a bail hearing, where a judge decides the amount of money you must pay in order to be released ahead of your court date. (He or she could also deny bail.) If you cannot pay the bail amount - or get a bail bondsman or other agent to post a bond to cover it - you must remain behind bars until that court date.

The bail agent will generally charge 10 to 15 percent of the bail amount in order to post bond, and may require you to offer up some collateral - say, the deed on a property. You cannot get that fee back, even if you are found to be innocent. If you do not show up to court, the bail agent must pay the full amount of your bail, unless he can track you down - a situation that creates a market for bail enforcement agents, or bounty hunters, who capture fugitives in exchange for payment from the bail bondsman.

One major problem with the arrangement, critics say, is that it often means the poorest cannot escape jail before their hearing, even if their offense is as minor as jumping a subway turnstile or possession of a small amount of marijuana. Let's say a judge sets your bail at $500. A bail bondsman will likely not be interested in posting bond, because his take will be too small - just $50 or $75. But you don't have $500 to pay to secure your release. That means you are trapped behind bars until your court date, which could be weeks away.

"The idea that somebody goes and sits in Rikers Island [jail] and endures all of the hardship of that simply because they don't have $500 or $1,000 is truly offensive and serves no public purpose," says Jamie Fellner of Human Rights Watch. Two years ago, Fellner's group looked at non-felony offenders in New York City in 2008. While more than three in four were released on their own recognizance, more than 19,000 had their bail set at $1,000 or less. Eighty-seven percent of that group did not post bail; these non-felony offenders spent an average of 15.7 days in jail.

"Your ability to remain free depends on the size of your wallet, which just inherently discriminated against the poor," she said. (New York University professor James B. Jacobs said there has been improvement since that study in New York City: "We've had a tremendous reduction in our pretrial detention population," he said.) Fellner added that prosecutors ask for high bail amounts for poor offenders because they know they will end up in jail and be more likely to agree to a pleas deal.

"It's a way to get people to plea," said Fellner. "And you shouldn't be coercing pleas."

Four states - Illinois, Kentucky, Oregon and Wisconsin - have abolished commercial bail bonds. In many cases in those states, deposits are made to the courts. Lippman, the New York judge, is calling for nonprofits to become involved in the bail process in order to remove the profit motive. The National Conference of Chief Justices and American Bar Association have also sought to move away from a for-profit system.

Scott Hall, president of Professional Bail Agents of the United States, says the reformers are misguided.

"Leave it to government to think that even though we offer a free guarantee to the appearance of the defendant in court, they can do it cheaper," said Hall. He said that while Hollywood plays up the dramatic aspects of the business, he sees bail bondsmen as "glorified insurance salesman."

"We're a jobs creation program that saves taxpayer dollars creating small businesses where they have an incentive to protect the community by guaranteeing court appearance," Hall added. "And that sounds like a good thing."

In addition to criticizing the current system as unfair to the poor, Lippman complained that New York judges are not even permitted to consider public safety when considering bail. (Most states do allow judges to consider public safety.) Timothy Murray, chair of the Pretrial Justice Institute, said there should be two considerations when deciding on whether to keep someone behind bars: Are they a threat to public safety, and are they a serious flight risk. If not, he says, they should be released and expected to return for their court date on their own, with the aid a pretrial monitoring system.

It makes no sense, Murray argued, to tie "pretrial release to dollar amounts instead of tying pretrial release to measured risk." It is also illogical, he said, to put a fixed "price tag" on crimes without considering the specifics of the case, as most jurisdictions do.

Attorney General Eric Holder said at a symposium on pretrial justice last year that nearly two thirds of inmates in jails were awaiting trial, a situation that cost taxpayers $9 billion. Most of those awaiting trial in jail, he said, were non-violent, non-felon offenders, and a "disproportionate number of them are poor."

"Almost all of these individuals could be released and supervised in their communities," said Holder.

America and the Philippines are the only countries in the world with a for-profit bail industry; in the vast majority of countries, it is illegal to pay the bond for a defendant for a fee. The system has roots in English common law, the New York Times reported in 2008, "which relied on sworn promises and on pledges of land or property from the defendants or their relatives to make sure they did not flee."

Hall, of the Professional Bail Agents of the United States, said that the current system works because bail bondsman have an incentive to make sure that offenders show up to court - and to find them if they don't.

"It's not about anything other than guaranteeing court appearance," he said. "Every study that's ever been done proves that commercial bail works."

Shima Baradaran, a Brigham Young University professor focused on criminal law, said that while bail bondsman "do well in some respects, especially in getting their clients back in court, they do a terrible job at keeping their clients from being rearrested."

"They lose nothing if the person gets rearrested - in fact, they get more money," she said.

While moving away from a for-profit system would be a positive, she added, "practically speaking, I don't see it going away," in part because the industry supports many bail bond businesses that have been built up over generations.

"If we are to retain for-profit bail, which I think is inevitable, I think we need to have them take more responsibility to supervise their client, and somehow be held accountable for if their client gets rearrested," said Baradaran.