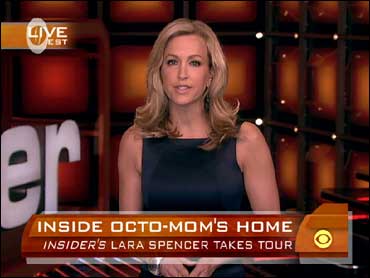 How the mother of octuplets, Nadya Suleman, is going to take care of them and their six siblings is one of the questions that Lara Spencer, the host of "The Insider" recently asked when she sat down with Nadia Suleman and her mother, Angela Suleman.

"As you know every day there is a new headline, not all of them nice. Everyone in the country seemingly knows something about Nadya Suleman. Many do not agree with her decision to carry eight more babies to term so we wanted to give Nadya the chance to answer some of the negative backlash about how she will care for her 14 children," Spencer told Smith.

"The Insider" went inside Suleman's cramped home, where there were duct taped vents, holes in the walls and Magic Marker stains on the doors - the very place where eight tiny babies will soon arrive.

"On a serious note, how are the conditions at the house? Is it a clean, safe place?" Spencer asked.

"Not for the babies. I believe we try to clean it as much as possible, but it's an old house and there's six little kids living there! Well, I love my grandchildren so I don't mind, it's for them I did it. Sorry, not for my daughter," Angela Suleman said.
"How does it feel that your home has been taken over," Spencer asked.

"Well, I love my grandchildren, so I don't mind. For them, I did it," Angela Suleman said.

"Now the possibility of foreclosure. You and your 14 kids could be out on the street. Do you have a plan?" Spencer asked.

"I do have a plan, every single day, that's why all these little things, these lies here and there, I have no room for them in my mind," Nadya Suleman said.

"She says she has a plan, but I'm listening to what she has to say, and the reality looks like two different things," Smith said.

"The reality is that her plan is that she hopes it will work out. I asked her point blank. 'What is the plan? Tell me what a day looks like in your vision with 14 kids?' And she said, 'You know what? I'll make it work out,'" Spencer said.

"What did she say when you asked her about having all of the eggs implanted," Smith asked.

"Harry, this was so interesting to me and I think this is what's most disturbing to everybody. She felt like she needed to do that, because she considered those fertilized eggs to be lives, just like a 10-year-old child," Spencer said.

So, Nadia Suleman implanted the eggs, thinking maybe she would get one, perhaps two more, which is the big problem that a lot of people have, Spencer explained.

"'Why have anymore when you have six healthy?" Spencer asked. "I believe there's a little selective interpretation of God's will. She wasn't able to have babies, so she used science to intervene, and now that there are eight babies, suddenly it's God's will. So there's a little confusion as to what is God's will and what she needs help with from science. And now we have 14 babies so dependent on her," Spencer said.

Watch "The Insider" tonight to see more of Lara Spencer's interview and all this week to get the most up-to-date information on the octuplets.