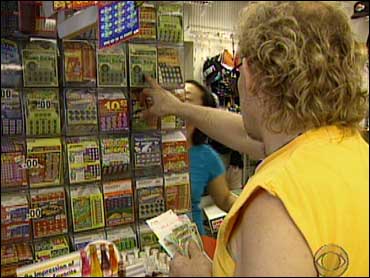 Americans gamble over $54 billion a year on lotteries, and a majority of the 42 states that run lotteries claim the games increase funding for education. But a CBS News investigation has found that most of the lottery sales never make it to a classroom.

After 50 cents of every gambled lottery dollar is given back in prize money and operating expenses swallow another 20 cents, on average, leaving just 30 cents of every lottery dollar going back to the state.
Lotteries do help, but not nearly as much at you may think. Even when proceeds are earmarked for education, lotteries generally cover only a fraction of state education spending.

For example, in Illinois, where the state spends $6.5 billion a year on education, only $619 million, or one-tenth, comes from the lottery. In California, with an $84 billion education budget, the lottery funds only about $1.2 billion, or one-seventieth. In Florida, lottery proceeds cover one-twentieth of state education spending. In New Jersey, it's one-thirtieth; in Texas, one-fiftieth.

"We thought that it would be a windfall" says Michael Johnson, executive director of the Illinois Association of School Boards. He says the idea that lottery money adds to education funding is a myth.
"The general public -- they were fooled by this," he says. "The belief that that's additional money, above and beyond what we would normally get, that's the part that's not true."

"Well, it's certainly one of the worst votes I ever made," says former Illinois State Senator Dawn Netsch.

Netsch, whose vote helped pass the Illinois lottery in the 1970s, says lottery money simply replaces tax dollars legislators might spend on education, but instead spend on other projects.

"The lottery becomes part of the big pot of money that funds the basic functions of state government," Netsch said.

In Florida, where lottery proceeds are a billion dollars a year, spending per pupil…has dropped nine spots from 37th to 46th in the nation since voters approved a lottery 20 years ago.

"It was sold to the public as an enhancement to the current revenue stream, says longtime Palm Beach County School Superintendent Arthur Johnson. "It was a replacement to existing dollars that diminished over time."

In fact, our investigation of government spending in the 24 states that dedicate lottery funds for education yields a stunningly bad report card. The percentage of state spending on education is down or flat in 21 of those states from coast to coast.

Down, for example, in the following states: Washington (-6 percent), New York (-5 percent), Missouri (-4 percent). It's down 3 percent in Florida, Illinois, Ohio, and Michigan and Oregon. Texas is down by one percent.

"Lottery dollars are revenues that the states would not have otherwise," says Tennessee Lottery president Rebecca Hargrove.

Hargrove has run the lottery in Illinois, Florida, Georgia, and now, Tennessee. She argues things would be even worse without lotteries, and that they are more popular than raising taxes.

"What you'd have to know, which is impossible for you to know, is how many dollars education would have gotten if there weren't lottery dollars," says Hargrove. "Once a lottery passes, there are added dollars to the bigger pie."

In Tennessee and Georgia, lotteries do fund something new, the HOPE Scholarship, which subsidizes tuition for kids who maintain a B average in high school and stay in state for college. But the scholarship program is the exception, not the rule, when it comes to lotteries and education.

In Florida, former governor Lawton Childs, once called the lottery 'A great hoax on the people."

"The lottery's job is to raise as many dollars as possible, as responsibly as possible," says Hargrove. "It's the public policymaker's job, be they legislators or governors, to determine how those dollars are spent."

This year, as he floated a proposal to privatize his state's lottery, Illinois Govenor Rod Blagovich called the lottery a "shell game." Dawn Netsh, who now teaches at Northwestern Law School, agrees.

"Many people, at least, still think of the lottery as being sort of an add-on, a supplement," says Netsch. "It never was that. It was a shell game from the beginning."

A game, it appears, in which the big winners are not in the classroom.