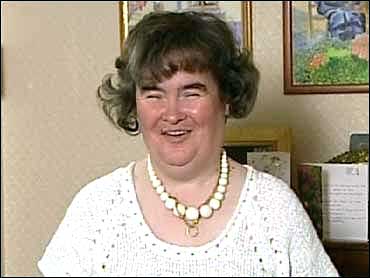 It's already gotten more than 25 million hits - the YouTube video that made a rather ordinary British woman, Susan Boyle, an extraordinary singing sensation.

But the question for many viewers was, "Was this all she could sing?" And the answer is no, as CBS News correspondent Elizabeth Palmer reports.

A decade ago, the then-unknown Boyle sang "Cry Me A River" for a local charity CD. CBS News played the recording for Amanda Holden, one of the three judges on "Britain's Got Talent," the reality show that has made Boyle a star.

"She has the voice of an angel," Holden said. "The quality of her voice is - it's so clear. It's so pitch-perfect and there's that kind of real chocolate velvet-ness to it."

There's also a depth and a passion no one expected from this middle-aged Scottish lady who seldom left the Edinburgh suburb where she cared for her aging parents.

But suddenly she's got paparazzi on the doorstep, and appearances on U.S. network and cable news shows in the U.S. and around the world.

"It has been a little bit like an express train, and I'm taking it all in my stride," Boyle told CBS News

More than 20 million clicks on you tube have made Boyle a celebrity - because she can sing of course, but also because she's modest and simple, a sort of anti-celebrity.

"I worried that people might take advantage of her," Holden said in response to a question from CBS News. "I am worried that she might feel pressure to change."

Boyle is feeling the pressure as she prepares for round two in the "Britain's Got Talent" runoff competition.

She'll be back on stage at the end of May - no longer an oddball underdog, but the people's champion.