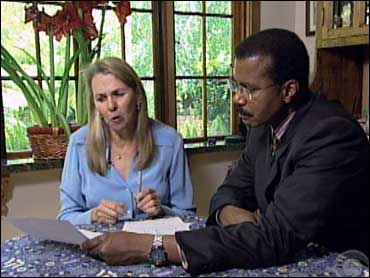 It's freezing in the Contessa Foods plant in Los Angeles, where workers process, package and ship tons of frozen vegetables, fish and meat each day.

"It's almost like putting 200,000 refrigerators … in one place," said John Blazevich, CEO of Contessa Premium Foods.

And it's powered primarily by the sun. An array of paper-thin solar panels rolled across a roof the size of two football fields has helped cut Contessa's energy use, CBS News correspondent Bill Whitaker reports.

"In half, which is significant for an operation that requires so much energy," Blazevich said. "It can be done and we did it."

Diana Ungerleider put solar panels on her roof last year. They not only got her meter spinning, but, as she says: "it's actually spinning backwards, meaning that the electricity being generated ... is feeding back into the grid."

But her head spins every time she gets an electric bill.

Known for fun in the sun, California more than all the other states combined, is now putting the sun to work.

At a Napa winery, the sun ripens the grapes and provides all the electricity.

"This is going to become a launching pad," said Gov. Arnold Schwarzenegger.

Much of this sun worship is pie in the sky, say critics like U.C. Berkeley's Severin Borenstein.

"Solar energy is definitely not the magic bullet for high energy costs," said Borenstein. "Right now, solar photo voltaic power is very, very expensive compared not just to fossil fuels, but compared to the other renewable sources that are out there."

And, as Ungerleider says, that's the biggest downside. She paid $50,000 for her solar power.

But, she says, "my system will probably pay for itself after about 10 years. And after that, it's just free energy."

Solar and green technologies added 15 percent to the $40 million cost of the new Contessa food plant.

Rising demand for solar technology should bring prices down eventually, but for now it helps to have green in your heart and in your pocket.