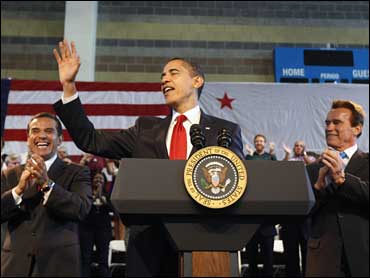 (AP)
The San Francisco Chronicle reported this morning that California Gov. Arnold Schwarzenegger may be setting his sights on Washington and considering a run for U.S. Senate in 2010.

The Chronicle points out that the Terminator turned governor has been tactful in his political allegiances. He campaigned for Sen. John McCain during the 2008 campaign and showed up last week with President Obama at a White House meeting on infrastructure.

The article points out his ambitious campaigning across the state for his new budget plan and notes that lately the governor has softened his tone on a political future.

"I have my hands full with all the stuff I'm doing now," Schwarzenegger said earlier this month. "I'm concentrating on that and not what I'm going to do next," he told the Chronicle reporter.

"You know," he apparently added, "I'm not a politician. I'm a public servant."

He and wife Maria Shriver are not strangers to Washington's power circles.

Saturday night, Schwarzenegger brought down the house during his Republican "response" at Washington Gridiron Dinner. He laughed at the journalists' apparent dumping by the president, who declined the invitationt to attend.

"You did such lovely work for [Obama]," the governor told Washington's media elite. "You put your lives on hold to put him in the White House. Now you get all dressed up, the champagne's on ice, and you find out he's just not that into you," he joked, according to the Washington Post.