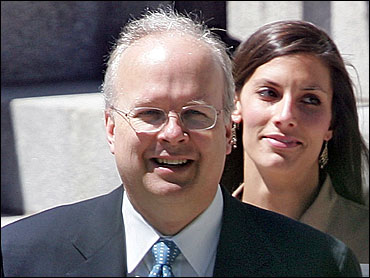 Presidential adviser Karl Rove won't be a criminal defendant in the CIA leak case, but he could still end up being grilled in court as a witness.

Special Counsel Patrick Fitzgerald could question Rove about whether the Bush administration compromised a CIA officer's identity to retaliate against a political critic.

Still, Rove and the White House could breathe a sigh of relief Tuesday after the prosecutor told Rove's lawyer he wouldn't seek a federal indictment against the political operative.

The announcement cheered Republicans and a White House beleaguered by war and low approval ratings, and if Rove would have been charged with any crimes, it would have been a major blow to the administration's credibility, CBS News correspondent Gloria Borger reports.

Mark Corallo, a spokesman for Rove, said the White House official "is elated" and said that "we're done."

Rove has been identified as a likely defense witness in next year's trial of I. Lewis "Scooter" Libby, Vice President Dick Cheney's former chief of staff. Libby has been charged with lying to the FBI and a federal grand jury about how he learned about Valerie Plame's CIA status and what he told reporters about it.

If Libby's defense attorneys summon Rove to testify, Fitzgerald can cross-examine him about a host of issues, including a July 2003 conversation Rove had with syndicated columnist Robert Novak days before Novak published Plame's name.

"It's a chapter that has ended," Mr. Bush said. "Fitzgerald is a very thorough person. I think he's conducted his investigation in a dignified way."

The president said White House officials would remain mum about the leak and the results of the investigation. "I think it's going to be important for you all to recognize there's still a trial to be had," he said to reporters. "And those of us involved in the White House are going to be very mindful of not commenting on this issue ... because of the Libby trial."

At the White House, Rove was all smiles, as he usually is, as he carried out his normal routine. With Chief of Staff Joshua Bolten in Iraq with Mr. Bush, Rove ran the senior staff meeting.

While a cloud may have been lifted from its top political operative, the White House's embarrassment over the Plame leak has not ended. The administration faces the possibility of a parade of current and former top officials being called to testify during Libby's trial, starting with Cheney.

In court filings, Fitzgerald has described a White House campaign — led by Cheney — to discredit Plame's husband, former U.S. Ambassador Joseph Wilson, after he wrote an opinion piece in The New York Times in July 2003 that accused the administration of twisting intelligence on Iraq to justify the war.

Fitzgerald has not ruled out calling Cheney, who cut out Wilson's article with a pen knife and scrawled questions on it wondering whether Plame sent her husband on a "junket" to Niger to determine the accuracy of allegations that Iraq had tried to buy material to make a nuclear weapon.

"Prosecutors have ethical obligations not to indict someone when they don't think they can win at trial and I suspect that may be what happened here," CBS News legal analyst Andrew Cohen says. "For whatever reason Fitzgerald the prosecutor didn't believe he could take a case against Rove to a jury and win it."

Sen. Charles Schumer, D-N.Y., one of the first senators to call for an independent investigation of the leak, said, "We have faith that Prosecutor Fitzgerald will continue to pursue this case and turn over every other stone and follow every lead, no matter how high they take him."

Other Democratic lawmakers called Tuesday for a separate congressional inquiry into Rove's role in disclosing Plame's name to reporters and the question of whether Rove or others at the White House sought to discredit Wilson.

"Congress has a constitutional obligation to provide a check and balance on the executive branch," said Rep. Henry Waxman, D-Calif. "Providing a public accounting of the actions of Mr. Rove is an important part of fulfilling this obligation."

Early in his investigation, Fitzgerald abandoned the idea of indicting anyone on a charge directly related to actually leaking Plame's identity, which was classified at the time.

Instead, his investigation focused on the possibility of a cover-up and lies by administration officials about how and when they learned about Plame and whom they told. So far, only Libby has been indicted. Fitzgerald's spokesman, Randall Samborn, refused on Tuesday to comment on whether the investigation was continuing.

Until last summer, the White House had denied that Rove or Libby had anything to do with leaking Plame's identity. Those claims were countered by grand jury testimony from Time magazine reporter Matthew Cooper who said both Rove and Libby had told him about Plame.

Rove testified before the grand jury an extraordinary five times, insisting initially that he had talked only to Novak. Rove later admitted talking to Cooper.

Robert Luskin, Rove's attorney, said it was too soon to know whether Rove would take the stand at Libby's trial, which is scheduled to begin in January.

In court filings, Libby's lawyers have predicted Rove will be "a key witness at trial," an assertion Fitzgerald has dismissed as a ploy "to put the conduct of others on trial."

At this stage, Luskin said, both Fitzgerald and Libby's lawyers are feeling each other out.

Fitzgerald is trying to keep the case simple and limited to the question of whether Libby lied, while Libby's lawyers are trying to broaden it so they can get access to as much of the prosecutor's evidence as possible before trial, Luskin said.

"This is just positioning," he said.