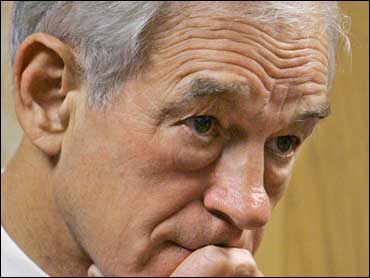 From the "take it with a huge grain of salt" department: A Rasmussen Reports poll pitting libertarian-leaning Republican Rep. Ron Paul against President Obama for the 2012 presidential election finds the two men within one point of each other among likely voters.

Deeming the poll evidence of "how totally flaky early presidential polling is," Politico's Ben Smith notes that Paul did not exactly light the world on fire in the 2008 GOP primaries.

The lawmaker, who has a small but passionate following, did not get ten percent of the vote in any primary contest until every candidate except John McCain dropped out of the running. (In addition, the Rasmussen poll was conducted using an automated survey, a methodology that CBS News sees as less reliable than polls using a live interviewer.)

A CNN/Opinion Research Corporation survey released last night, meanwhile, found that Paul comes in fifth place in the race for the GOP nomination. First place went to Mike Huckabee, who got the support of 24 percent of Republicans and right-leaning independents. He was followed by another 2008 candidate, Mitt Romney, who got 20 percent, and Sarah Palin, who got 15 percent. Newt Gingrich took fourth with 14 percent, followed by Paul at eight percent.