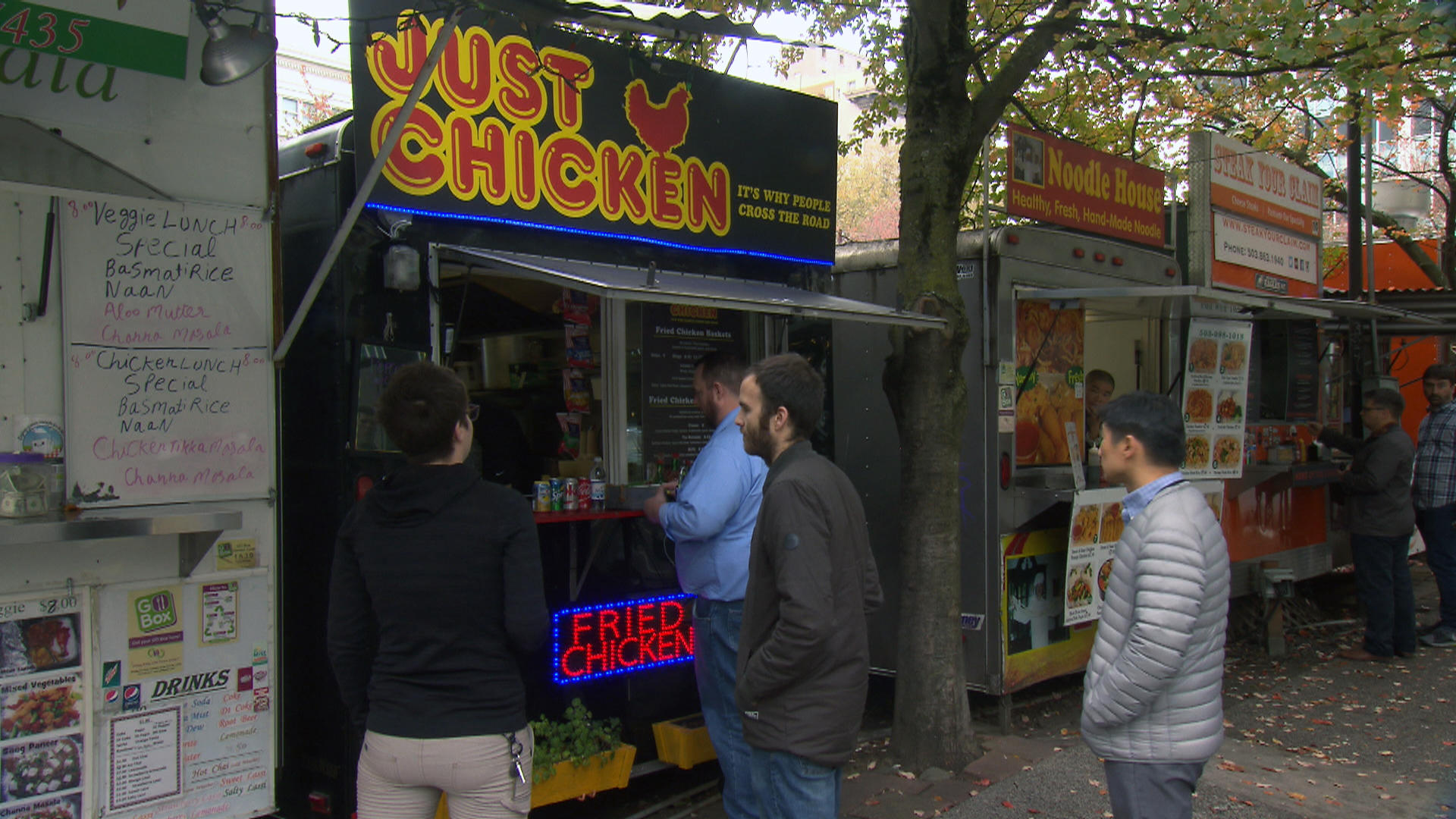 Consult any of those lists of the world's Most Livable Cities and, inevitably, Portland, Oregon, figures prominently. The place is bathed in natural beauty. But it also draws high marks for its civic personality, a laid-back, tolerant disposition sprinkled with more than a modest dose of eccentric. "Keep Portland Weird" is the city's unofficial slogan.

Yet last May, Portland also witnessed one of the most horrific recent hate crimes. Two men were killed aboard a light rail train after coming to the defense of two black women threatened by a white supremacist.

This tragedy shocked Portland to the core. It also fed the suspicion that this is a city in transition, and made this angry time in political and cultural life REAL.

What is the sound of a community in conversation with itself? We went to the upper left corner of the country to listen.

For Portland's 650,000 residents, their scenic locale is paired with a liberal spirit… all cycling and recycling.

This sensibility provides the premise for an entire tv show. "Portlandia" skewers -- organically, of course -- the city's progressiveness and preciousness.

The city's mayor, Ted Wheeler, counts himself as a fan, if at times a reluctant one.

Ted Wheeler: There's one episode where there's a four-way stop. And everybody's waiting for everybody else to go.

Carrie Brownstein: We would be failing if it wasn't hitting close to home, because we are digging deep into our own lives.

Portlandia is the brainchild of Carrie Brownstein and Fred Armisen, both part-time Portland residents.

Jon Wertheim: Some of this, you're poking fun at yourself, I assume.

(PORTLANDIA CLIP) FRED: Remember when people were content to be unambitious, Many had no occupations whatsoever, maybe working a couple of hours a week at a coffee shop?

(PORTLANDIA CLIP) CARRIE: I thought that died out a long time ago.

(PORTLANDIA CLIP) FRED: Not in Portland. Portland is a city where young people go to retire.

Colin Meloy, founder of the rock band the Decemberists, was one of the many "starving artists" who 'retired' to cheap, hip Portland in the 1990's.

Colin Meloy: The real ideal was to-- to work as little as possible to afford, you know, your basic living costs, and then have as much time leftover to write or to play shows--

Meloy moved here from Montana, and lived in a converted warehouse.

Whether they love Portlandia or hate it, people in Portland report real-life moments when they feel like they're in an episode.

(PORTLANDIA CLIP) JEFF GOLDBLUM: "I'm going to help you with all things doily."

Take, for example, the super-specialty shops the show lampoons.

(PORTLANDIA CLIP) FRED: "How does this work? Do we just buy a box of doilies?"

(PORTLANDIA CLIP) JEFF GOLDBLUM: "No, we tailor the doilies here to your needs."

We found a lovely real-life shop with 120-plus different kinds of salt.

Kaitlin Hansen: It's a Oaxacan-- Mexican sea salt that is infused with chipotle pepper and a pasilla pepper. And then -- it has ground-up agave tequila worms in it--

(PORTLANDIA CLIP) WAITRESS: It's just all across the board, organic.

(PORTLANDIA CLIP) WAITRESS: Here is the chicken you will be enjoying tonight, his name was Collin. Here are his papers, ok?"

While in real Portland, even the food carts have a 'gourmet' feel.

Jon Wertheim: This is my maiden veggie bratwurst.

Who says you can't make a good sausage out of chick peas?

That's the thing: all the food carts and bike lanes and live music and microbreweries are easily mocked, but they make for a pretty good life, too.

On Portlandia, the only thing that even comes close to conflict: an insurrection by baristas in the city's many coffeeshops…

And it's here, unmistakably, is where parody and reality diverge.

In real-life Portland, at least lately, they're arguing over a lot more than coffee. More than four times as many people here voted for Hillary Clinton as for Donald Trump, and after his election some of the country's largest street demonstrations arose in Portland.

Steve Duin: I think people are alarmed on a daily basis by what's happening, and they feel in a relatively safe place in Portland and in Oregon to mount their defense.

Steve Duin is a longtime columnist for the local newspaper, "The Oregonian."

Jon Wertheim: What is it like for Portland these days when the progressivism of this city is not necessarily reflected on a national level?

Jon Wertheim: It is?

Steve Duin: I mean-- yes.  This city, if it's having a moment, maybe it's a moment of clarity. Maybe it's a moment of-- gratitude, thankfulness that-- most people in this city do not subscribe to the unbelievable notions of civility and generosity coming out of the nation's capital right now.

But the streets of Portland have been notably un-civil since Donald Trump's election. Precisely because it's a liberal enclave, right-wing nationalists have targeted the city with rallies and marches. They've been met by far-left antifa protestors with people on each side trying to bait the other into violence.

Ted Wheeler: The ability to disagree amicably is an art-- much in jeopardy.

In 2016, when Ted Wheeler ran for mayor, Portland was placid… he's now presiding over a suddenly pugnacious city.

Ted Wheeler: Where I think we've gotten a little sideways as a culture, is people take it very personally if you have a different perspective, or a different point of view. I would just say we need to lighten up.

Jon Wertheim: You say lighten up, but across the street from where we are, we-- we've had protests, and counter-protests, and riot gear-- what's going on in Portland?

Ted Wheeler: Absolutely, sure. Well, Portland has a long history of protest, and counter-protest. And we are a progressive community. And as a result, there are some very far-right organizations that like to come here, and they like to protest.

Wheeler calls the targeting of Portland by white nationalists an attempt to quote, "poke the bear." This is what the bear looks like here.

Antifa Member: Well-- being anti-fascist activists is-- not always safe.

Four members of Portland's Rose City Antifa -- their matching hoodies proclaiming "Fighting Fascism Since 2007" – agreed to meet us only in an anonymous hotel room. They say their mission is to organize self-defense against white supremacists and fascist groups.

Antifa Member: You know, with-- with white supremacists who are threatening the lives of people that we care about, there-- there is no such thing as dialogue.

"I think if we're at a crossroads, it's, like, 'okay, now-- we're done being the cute city that everybody wants to sort of laugh about but love. What are we gonna do now?'"

If only they'd waited an hour, they could have encountered their arch-enemy, a guy named Joey Gibson. He has organized and led recent right-wing demonstrations in Portland. Just after antifa left, he came to the very same hotel room, with the very same "it's not safe to be seen in public" ground rules.

Joey Gibson: I've been attacked from all over the place. There's a lotta people, they don't like my message.

The message on his hoodie reads "Patriot Prayer" but he pleads guilty to Mayor Wheeler's charge of coming to Portland to provoke, to "poke the antifa bear."

Joey Gibson: It's also been about bringin' Antifa out on the streets, too, to help people see what they're willing to do.

Jon Wertheim: They feel threatened at your events. They don't feel safe there.

Jon Wertheim: You-- you just said you wanted 'em to come.

Joey Gibson: No, I'm sayin'-- of course we want them to come 'cause we want to expose them for who they are.

As for who he is, Gibson insists he's no fascist or white supremacist. However...

Joey Gibson: We had a white nationalist show up at one of the-- the freedom marches. I mean, yeah, that's absolutely true.

The white nationalist Gibson is talking about was Jeremy Christian, who in May, police say, stabbed two men to death on a light rail train after they came to the defense of two African-American women Christian was harassing. One of the women was wearing a hijab. The crime made international news – in part because it ran so counter to Portland's peace and love image.

It's likely true that the alleged crime had as much to do with mental illness as racial animus. But it's also true that Portland's progressive present is very much at odds with its prejudiced past.

Ted Wheeler: Portland is one of the least diverse cities of its size in the United States. And I don't think we can really move into the future, unless we confront some of the darker things about our past. And the reality is, we have a racist past.

That includes a state constitution adopted in 1857 that actually banned black people from moving to Oregon, and a once-robust KKK presence.

Ted Wheeler: And so we have a lot of making up to do. And there's a lot of old history, and hard feelings that are still very much just under the surface.

Wheeler has taken at least one concrete step to address those hard feelings; hiring an African American woman as police chief. But the inequality runs deep. The average family income for whites in Portland is more than double that of African-Americans.

Colin Meloy: I think that there are cracks in that sort of facade of-- of cute and precious Portland. And there-- there is a lot of people sort of frustrated and angry in the city, as there are in any city.

It's fitting that Portlandia is now in its final season, because it satirizes a city that no longer exists. Starving artists may still want to come here, but with the average rent for a studio apartment at $1200 bucks a month, where will they live? Too often, the answer is the streets. Portland's homeless population is up 10 percent in just the last two years.

Colin Meloy: I think if we're at a crossroads, it's, like, 'okay, now-- we're done being the cute city that everybody wants to sort of laugh about but love. What are we gonna do now?'

What is Portland gonna do now?

On Portlandia, the mayor -- played by actor Kyle MacLachlan -- has his answer.

(PORTLANDIA CLIP) MAYOR: As Mayor I've decided that we need to secede and form our own weird and yet independent nation. (crowd cheers)

In some ways, that's what real-life Portland has done, doubling down without apology on the weird and independent. It's annual adult soap box derby and naked bike ride, they'll go on as scheduled, thanks. And columnist Steve Duin would like to see the city go even further, and become a refuge for those who'd like to flee the angry politics of 21st century America.

Jon Wertheim: Sounds like you're describing an Oregon Trail that's being populated, not with-- not with pioneers, but with progressives headed to this part of the world.