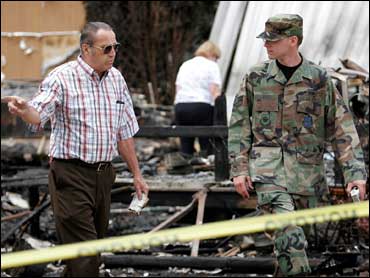 The Warren Grove Gunnery Range says it tries hard to be a good neighbor to the growing communities in the New Jersey Pine Barrens.

But if your neighbor repeatedly set the neighborhood on fire, crashed a plane into it, and shot up the local elementary school, how neighborly would you feel?

The latest hazard caused by the range — a massive forest fire that burned 14,000 acres, damaged or destroyed a handful of homes and forced 6,000 people to flee — underscores the tensions between the base, which trains pilots bound for Iraq and Afghanistan, and the ring of senior citizen developments encroaching ever nearer.

"It should be shut down," said Joy Zomerdyke, who fled her Barnegat home with her husband when a police officer frantically banged on the door as the flames approached Tuesday afternoon, yelling for them to get out immediately. "There have been too many mistakes. People's lives were in danger."

Although the military is still investigating, National Guard officials say they believe the fire started when a flare dropped from an F-16 jet on a training maneuver ignited the tinder-dry Pinelands on a day when special fire safety precautions were to be in effect.

The Zomerdykes were fortunate to return home two days later to an unscathed home, right down to the can of beer Dan Zomerdyke had just popped open before the evacuation order.

But across the street, Lester Balkie found only a pile of charred ashes where he and his wife of 62 years had lived. Catherine Balkie passed away last October, and now even his photographs of her are gone.

Yet in the face of devastation, Balkie bore no hostility toward the range or its personnel.

"I'm a firm believer in the military," he said, wiping away tears as he looked at the tiny handful of watch parts and coins his relatives salvaged from the rubble. "They're doing their job. But maybe there's a better place for them to do it — like the Mojave Desert."

The blaze was just the latest in a string of accidents at the Warren Grove range: