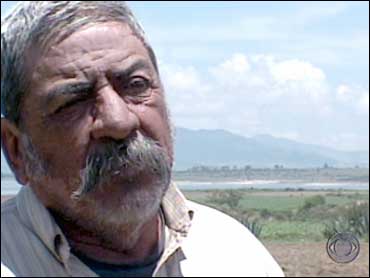 In the heart of Mexico's breadbasket — where plowing the land is still done the old fashioned way — farmers like Tirso Alvares Correa worry about their corn crops, reports CBS News correspondent Randall Pinkston.

Corn from abroad is taking a toll on us, he says. We can't sell our corn anymore.

Where are those products coming from?

The United States and Canada have been selling tons of corn in Mexico for over a decade, thanks to NAFTA — the North American Free Trade Agreement. It eliminated tariffs on most agricultural trade and was supposed to be a win-win for the United States and Mexico.

For Alvares Correa, NAFTA has been a disaster. While the trade agreement opened up U.S. markets to Mexican corn farmers, they haven't been able to sell any corn in America.

Farmers said that entire towns are emptying because thousands of small farms have gone out of business. As many as 2 million farm workers have lost their jobs — the vast majority headed north across the U.S. border looking for better pay.

No one questions that Mexico's small corn farmers are hurting — due in large part to the impact of NAFTA. But supporters of the free trade agreement say what's happening here is just part of the story.

Crops such as avocados are the other part. They're a growth crop that — unlike Mexican corn — has helped farmers benefit from NAFTA.

Avocado production in Mexico means jobs — not only in the orchards — but for truck drivers, packers and inspectors.

"NAFTA just opened that door, which made a significant difference for the industry," says Illsley.

But it's unlikely that avocados can be the solution for most beleaguered corn farmers. Startup costs are steep and their land may not be suitable.

So millions of corn growers have no choice but to grind their crop to a pulp and feed it to cows.

In two years NAFTA will lift the last limits on U.S. corn exports, which could put even more farmers out of business — and trigger a new wave of migrants headed north across the U.S. border.

Free trade has been a disaster for us, says Tirso Alvares Correa. But his worst fear is that soon there won't be anyone left to work the land that has been in his family for generations.
Randall Pinkston