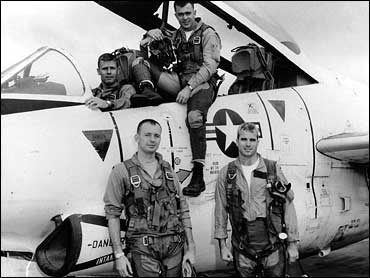 
The highest voltage third rail of this presidential campaign may not be race, sex, or age, but Senator John McCain's military service.

McCain's campaign Sunday issued a pair of outraged statements after retired general and Barack Obama supporter Wesley Clark said he didn't think that McCain's service as a fighter pilot and prisoner of war was relevant to running the country. Obama has consistently praised McCain's service, and called him "a genuine American hero."

But farther to the left - and among some of McCain's conservative enemies as well - harsher attacks are circulating. Critics have accused McCain of war crimes for bombing targets in Hanoi in the 1960s. Sunday, a widely read liberal blog accused McCain of "disloyalty" during his captivity in Vietnam for his coerced participation in propaganda films and interviews after he'd been tortured.

"A lot of people don't know… that McCain made a propaganda video for the enemy while he was in captivity," wrote Americablog's John Aravosis. "Putting that bit of disloyalty aside, what exactly is McCain's military experience that prepares him for being commander in chief?"

"Getting shot down, tortured, and then doing propaganda for the enemy is not command experience," Aravosis wrote in the blog post, entitled "Honestly, besides being tortured, what did McCain do to excel in the military?"

"The American people know that John McCain's record of service and sacrifice is not a matter of debate. He has written about and discussed his service as a POW extensively-often in excruciating and painful detail," said McCain spokesman Brian Rogers. "The American people will judge harshly anyone who demeans or attacks that service."

McCain has written repeatedly of his service, including a long 1973 magazine article and in his memoir, Faith of My Fathers. A Navy aviator from a military family, he was shot down on his 23rd sortie over Vietnam on October 26, 1967. His mission was to bomb a power plant in the North Vietnamese capital. Already suffering from broken limbs, he was beaten by a crowd before being taken to a POW camp. After being tortured there, he participated in some Vietnamese propaganda efforts.

"I had learned what we all learned over there: Every man has his breaking point. I had reached mine," he later wrote.

But he later defied his captors by refusing to meet with anti-war delegations from abroad, he wrote, and also refused the most valuable special treatment he was offered: Early release.

Obama and the Democratic establishment haven't challenged McCain's record. Indeed, even Clark's words came in response to a direct question from CBS's Bob Schieffer on the specific relevance of McCain's service to the presidency.

West Virginia Senator Jay Rockefeller in April cut a bit closer, suggesting that McCain's days as a fighter pilot were themselves a critique of his character.

"What happened when they [the missiles] get to the ground?" he asked. "He doesn't know. You have to care about the lives of people. McCain never gets into those issues."

Rockefeller promptly, abjectly apologized, praising McCain's "honorable and noble service to our country" and deploring his own "inaccurate and wrong analogy." His apology reflected a conventional political wisdom that McCain's heroism is too well established, and a climate of respect for soldiers too strong, for attacks on his service to do anything but backfire.

But Aravosis, who reiterated his criticism in an interview with Politico Sunday night, isn't the only one to test this line of attack.

Valentine suggested McCain contemplated suicide-something the candidate has written about, and attributed in part to his guilt at not withstanding torture-because he was a "war criminal" whose bombs fell on civilians.

McCain, who sought-along with Senator John Kerry-to debunk claims that Vietnam still held American prisoners into the 1990s, has been attacked in similar terms by leaders of POW/MIA movement, whom he and Kerry cast as charlatans.

That movement has produced the most outlandish attacks on McCain, including widely dismissed and unsubstantiated claims that McCain was not tortured and a smear casting him as a "Manchurian candidate."

But most of the attacks on McCain's war record are now coming from the left. In a Huffington Post blog, a former editor of Mother Jones magazine, Jeffrey Klein, called-in tones reminiscent of right-wing attacks on Kerry in 2004-on McCain to release elements of his Navy record that the candidate has not made available to the public or the press.

"Some of the unreleased pages in McCain's Navy file may not reflect well upon his qualifications for the presidency," he wrote. As to why, Klein speculated that "From day one in the Navy, McCain screwed-up again and again, only to be forgiven because his father and grandfather were four-star admirals."

David Fenton, a prominent progressive public relations executive who works for MoveOn and other groups, also inquired about details of McCain's Navy sorties, a source familiar with the inquiries told Politico. Fenton declined to comment on the inquiries, and a person familiar with them said they were unconnected to his work for MoveOn.

Some anti-war activists link McCain's current position on Iraq to his time in Vietnam.

"I wouldn't characterize anybody who fought in Vietnam as a war hero," said Medea Benjamin, a co-founder of the theatrical anti-war group Code Pink. "In 23 bombing sorties, there must have been civilians that were killed and there's no heroism to that."

"Anyone who can't look back and admit how wrong it was to be in Vietnam and be killing civilians deserves to be challenged," she said, though she stressed that her group is more focused on McCain's present support for the war in Iraq than on his past.

Benjamin said she had her doubts about whether criticism of McCain's record could catch on, and she's not the only skeptic. Even Valentine, the CounterPunch author, said McCain's wartime experience could only be questioned "off-Broadway."

Others, however, disagree, and the increasing buzz of emails and blog posts-the new equivalent on the left of what, in the 1990s, would have been stirrings on conservative talk radio-suggest that this line of attack won't go away, at least not from elements of the energized pro-Obama grassroots, and from parts of the anti-war left.

Noam Chomsky, the linguist and activist, said in an email that he thought Americans should question the relevance of McCain's torture in an unjust war to his campaign.

"The questions could scarcely even be understood within the reigning intellectual and moral culture-though I don't doubt that much of the population would understand," Chomsky said.

And Aravosis was unapologetic about his charge of "disloyalty," citing the similar charges levied at Kerry from the right in 2004.

"McCain is running for president of the United States, not the student council. He should stop feigning shock and outrage and start answering some very legitimate questions about his character and his experience," he said in a message to Politico. "Well, the Republicans sported Band-Aids to mock John erry's medals from Vietnam. They mocked his injuries in war."

"McCain isn't being mocked, he's being questioned," he said.

For now, that is a minority view on the left. Democrats took from the Vietnam era the lesson that they should not attack soldiers' service, and McCain's Senate colleagues of both parties-including Obama- have expressed deep respect for his service and his suffering. He also worked after the war to heal some of its open wounds, winning the unexpected appreciation of some anti-Vietnam war stalwarts, who are now damping down the attempts to attack his war record.

"I know and like McCain," Tom Hayden, a former California State Senator and prominent anti-war activist, told Politico in an email. "From my own perspective and that of many anti-war activists of that era, the fact that he bombed North Vietnam some 25 times, probably killing civilians, gets blurred with the facts that he suffered through that long prison ordeal, then also went on to promote diplomatic relations between the two countries."

"It's like asking a guy that served his jail term here-you'd say he's done his time so that's behind him," Hayden said.
By Ben Smith