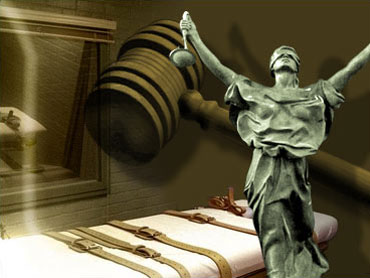 Lawyers for two Kentucky death row inmates - Ralph Baze and Thomas Bowling - are presenting a novel argument to the nation's highest court - not that the death penalty should be abolished, but how the two convicted murderers should be executed.

They claim the lethal injection method used in 35 states can cause pain and suffering, a violation of the 8th Amendment, which prohibits cruel and unusual punishment.

"From the very beginning," says Forham University Law professor Deborah Denno, "from the very first execution, there've been signs of consistent egregious problems that exist to the present day."

Lethal injection puts three chemicals into the condemned inmate; sodium thiopental, to cause unconsciousness, pancuronium bromide, to paralyze the inmate and sodium pentobarbital, a quick killing agent which induces a heart attack. It's supposed to bring death in two to ten minutes.

But Denno, a death penalty expert, told CBS News correspondent Randall Pinkston that the drugs are sometimes injected improperly. It happened in 2006 in the execution of Angel Diaz in Florida.

Michael Rushford of the Criminal Justice Legal Foundation told Pinkston, "the Constitution doesn't give a murderer a right to a pain-free execution."

Rushford's organization supports lethal injection, but acknowledges there are problems.

"The people that administer these drugs need to be trained to do it correctly," Rushford said.

Lawyers for the Kentucky inmates propose using one quick-acting drug, not three.

"If you just give one drug," said Denno, "then there's certainty that there will be death and that death will be humane."

Since the Supreme Court decided to rule on lethal injection, states have observed an unofficial temporary delay in carrying out the death penalty. A decision by the court is expected to come later this year.