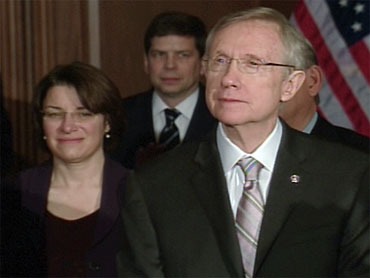 Ed Kilgore is a special correspondent for The New Republic. He is also managing editor of The Democratic Strategist and a senior fellow at the Progressive Policy Institute.

Where is it most painful to be a highly visible incumbent politician at this particular moment in U.S. history? Perhaps it's California, where current economic and budgetary discontents are compounding a growing public fury over chronically dysfunctional state government and an imprisoning constitution. Maybe it's Florida, that fading Sunbelt powerhouse full of simmering regional and ethnic rivalries, whose perma-tanned governor has struggled to make up his mind which political party he belongs to.

But you couldn't go far wrong by selecting Nevada, a state that shares Florida's disastrous economic dependence on real-estate speculation and tourism-Nevada currently sports the second-highest unemployment rate in the nation, 13.4 percent, trailing only Michigan-and the special disappointment of being, for many residents, a Paradise Lost. The state's own demographic and ideological diversity also rivals Florida's, home as it is to a rapidly growing Latino population (which made up 15 percent of the electorate in 2008), plenty of extremely conservative Mormons, powerful and politically active labor unions, a libertarian heritage of legalized vice, and a Republican Party moving so quickly to the right that you can barely keep up with it.

Moreover, Nevada's three top elected officials are currently Harry Reid, John Ensign, and Jim Gibbons. Reid, the majority leader of the U.S. Senate and never terribly popular back home, has looked like a sitting duck for over a year. Ensign, once considered a rising conservative star, has been exposed as a sanctimonious hypocrite over the course of a particularly sordid adultery-and-cronyism scandal, in which a group of mysterious evangelical allies operating out of a compound on C Street in Washington, known variously as The Family or The Fellowship, were caught unsuccessfully trying to clean up his act or cover it up. Gibbons has had his own, somewhat more cartoonish series of sex scandals-although maybe they were just "relationship scandals," if you buy his claim that he hasn't had sex since the mid-'90s.

Luckily for him, Ensign is not up for reelection until 2012. Unluckily enough, Harry Reid is up for reelection in 2010, and, seeing as his son, Clark County (Las Vegas) Commission Chairman Rory Reid, is the frontrunner for the Democratic gubernatorial nomination, you'd think that Nevada Republicans would have a straight, clean shot at a sweep that dethrones the Reid dynasty. But it's hardly that simple, thanks to Byzantine and fractious Republican primaries for both the Senate and the governorship (where Jim Gibbons is still a formidable candidate), the existence of an independent Tea Party ballot line, and the always-important factors of money and organization, where Democrats have a distinct advantage. Just six weeks before Primary Day, you'd have to say that handicapping Nevada's political races is something of a crapshoot.

Dating all the way back to November 2008, Harry Reid's "favorable" rating in Nevada polls has been wallowing monotonously in the high 30s and low 40s, deadly territory for an extremely well-known incumbent, and particularly for a national party leader who claims to be able to represent his state's values and bring home the bacon as well. The difficulty that Republicans have experienced in recruiting a top-tier Senate candidate has newspapers hesitating to dust off obituaries to Reid's Senate career. But in head-to-head polls with his most likely GOP opponents, Reid has persistently trailed all of them, sometimes by double digits, and almost never gaining much more than 40 percent of the vote.

After striking out in its attempts to recruit a strong candidate such as former Congressman Jon Porter, Republicans have on hand a field of three major candidates: casino owner, former state senator, party chairwoman, and ex-beauty queen Sue Lowden; realtor and famous-basketball-playing-son-of-famous-basketball-coach Danny Tarkanian; and right-wing grassroots favorite Sharron Angle. Until very lately, Lowden looked to be consolidating a strong lead for the nomination. Despite a somewhat moderate image (particularly on social issues), she won endorsements from national conservative figures like Rush Limbaugh and Sean Hannity, and benefited from the general impression that she was far and away the most electable of available Republicans.

But then, at a local candidate forum in early April, Lowden touted the idea that individuals should barter for health services as an alternative to Obamacare, making the particular mistake of mentioning the "olden days" practice of trading chickens for doctor visits. After Jay Leno and others started bagging on her for promoting "chickens for checkups," Lowden made the puzzling decision to defend her statement-repeatedly-instead of brushing it off and moving on. Now the whole meme has gone very viral. There hasn't been a Senate primary poll since this all happened, but Tarkanian and Angle-and for that matter, Harry Reid-have to be encouraged by all the laughter at Lowden.

Meanwhile, in the governor's race, the Republicans' frontrunner is former Attorney General Brian Sandoval, is struggling nearly as much as Lowden. The perpetually unpopular incumbent, Jim Gibbons, is playing every ideological angle to win re-nomination. Falling back on his traditional popularity among hard-core conservatives, Gibbons has boosted his anemic approval ratings by championing legal challenges to the new federal health reform legislation, and is accusing Sandoval-who has taken the supreme risk of refusing demands to take Grover Norquist's no-tax-increase pledge-of being a moderate squish. Democrats, figuring that Gibbons is a much easier mark, have been running attack ads on Sandoval that echo conservative criticisms.

A late twist has been the reaction of Nevada Republicans to the draconian Arizona legislation requiring law-enforcement officials to demand proof of citizenship from people who raise "reasonable suspicion" that they are in the country illegally. Sandoval, who is Latino, immediately endorsed the Arizona law, indicating where he thinks his own political bread is buttered. Gibbons took a different tack, arguing that Nevada's non-border location makes such tactics unnecessary. The third major candidate, former North Las Vegas Mayor Mike Montandon, who is trying to undercut Gibbons from the right, drew cheers during a recent candidates' debate for taking the following position:

"Why are we answering questions on whether illegal immigration should be legal," Montandon said. "I support what Arizona did absolutely."

He added that he supports profiling, calling it the single greatest tool of law enforcement.

That ought to go over well with minority voters, eh?

Aside from the particular dynamics of the senatorial and gubernatorial races, Republicans are uneasily aware that they don't match up well with Democrats in terms of money or campaign infrastructure. As one reporter put it last month:

The state party itself evoked laughter among several prominent Republicans I spoke to last week."There's a whole lot of unproductive activity going on over there without any rhyme or reason," said a Republican source, before unfurling a string of unsolicited insults at party leadership.

A key question would seem to be, "Where are the adults?" Can't someone put a heavy hand on the shoulder of a top-tier candidate and say, "We need you," or clear the field of primary challengers, or tell Ensign it's time to step aside?

"That's usually the role of the head of party," another Republican source said. "But who is the head of the party? Yeah, there's your answer.

Meanwhile, the massive organizing efforts that Democrats put into the 2008 Nevada caucuses and general election are still bearing fruit, their impact sustained by Harry Reid's campaign cash. Reid's various campaign committees donated $660,000-serious money in this relatively small state-to the Nevada Democratic Party in 2009 alone. By the end of March, he had raised over $16 million for his re-election (with an ultimate goal of $25 million) and, after a lot of early spending, still had over $9 million in cash on hand.

By contrast, Reid's two likeliest general election opponents, Sue Lowden and Danny Tarkanian, who still have to expend themselves in a June primary slugfest, each had just over one quarter-million in the bank at the end of March. Both have some personal money to throw in, but not enough to keep up with Reid's cash machine.

There are those who look at Nevada and conclude that nothing can save Harry Reid (or his son), not money, not organization, not a scattered and vulnerable Republican Party, not Latino outrage at GOP immigrant-bashing, not chickens-for-checkups, not a third-party candidate, and not even the possibility of a GOP ticket led by Jim Gibbons. It is, after all, a bad year to be an incumbent, much less a Democratic incumbent, much less the Democratic leader of the U.S. Senate. But add all of these factors together, in a year when Nevada Republicans are committing one unforced error after another, and almost anything could happen. Republicans probably shouldn't bet the farm on victory.