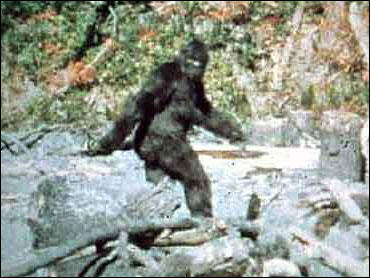 It is furry and walks on all fours.

Beyond that, about the only thing certain about the critter photographed by a hunter's camera is that some people have gotten the notion it could be a Sasquatch, or bigfoot. Others say it is just a bear with a bad skin infection.

Rick Jacobs says he got the pictures from a camera with an automatic trigger that he fastened to a tree in the Allegheny National Forest, about 115 miles northeast of Pittsburgh, hoping to photograph deer.

"We couldn't figure out what they were," Jacobs said of the images captured on Sept. 16. "I've been hunting for years and I've never seen anything like this."

He contacted the Bigfoot Research Organization, which pursues reports of a legendary two-legged creature that some people believe lives in parts of the U.S. and Canada.

However, the Pennsylvania Game Commission has a more conventional opinion. Agency spokesman Jerry Feaser said conservation officers routinely trap bears to be tagged and often see animals that look like the photos.

"There is no question it is a bear with a severe case of mange," Feaser said.