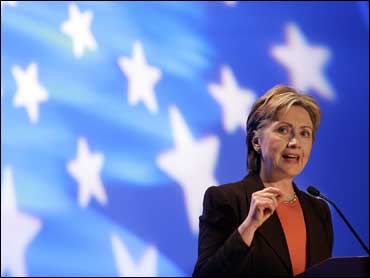 This column was written by Myrna Blyth.


Hillary reminds me of a couple of girls I knew in high school. They were the ones who figured out their grade-point averages on a nightly basis. They also were the ones who ran for everything — class president, president of the Hi-Y, captain of the debate team. And one of them always won because everyone else thought that if she wanted it so darn much, just let her have it.

But when Barbara or Linda (names that were popular in my era, but are almost unheard of nowadays) would become class president or whatever, she'd never really do much at all. Oh, sure, she may push through a couple of rules that she thought were important but nobody else cared much about. But it was really about winning, not getting anything done, that mattered to them. Having padded their extracurricular resume, their focus turned to filling out their college applications, usually to Smith, or, like Hillary, to Wellesley.

Those "most likely to succeed" girls often burned out surprisingly quickly. But Hillary was smarter than most, and in one important respect. While they married guys like themselves, who were ambitious but charmless, Hillary married Bill. And Bill knew instinctively that a great politician needs personality to go with the desire for power. He always sugar-coated his ambition with likeability.

Hillary just can't do that. Ever since she told us she's in it to win it, she has been shadow-boxing with herself rather than landing even a glancing blow on her rival candidates. Lately she's even given herself a few rights to the jaw. The "in it to win it" comment, which was part of her announcement and was supposed to show her grit, turned sour when Michelle Obama, who may turn out to be one of the Obama campaigns greatest strengths, declared, "This race is not about winning, because winning isn't enough nowadays. Winning without dignity, winning it without honor, winning without authenticity and truth is not winning at all, and we're not in it for that." That's good rhetoric, and it made Hillary look not tough, but self-serving.

When she ran for senator in New York the first time, Hillary went around the state on a Listening Tour. She scored points with voters, who thought she really wanted to hear their concerns. Well, she hasn't been doing much listening so far in this campaign (unless it is to her Hillary Corps of advisers who are united in believing she is the smartest woman in the world). Rather, she is talking, and talking too darn much — from her southern drawl in Selma to comparing herself to JFK (as Dick Morris said, "So now she's Catholic?") to her "vast Right Wing Conspiracy" comment this past weekend in New Hampshire. Every time she overdoes it in one way or another, fudges it a little, or pumps up the paranoia, she proves she is not, as she sometimes likes to style herself, the least-known famous person in politics. Nope, she has just keeps reminding us she is the Hillary we all know so well and whose many past misdeeds are so very easy to remember.

She still tops the polls, but Obama is gaining on her, as much because of her flaws as his presumed virtues. And even though Republican voters may not be thrilled by their own front-runners, Hillary is demonstrating that, even if she is ultimately the candidate, she could well manage to defeat herself, no matter who opposes her.

For years we have been hearing how divisive she is, that there are those who love her and those who hate her and not many in between. But that might not be the point at all. The vast middle of voters really don't have particularly intense convictions. Putting both politics and policies aside, they just want to like the person they vote for. And during the first weeks of Campaign 2008, Hillary is demonstrating she remains seriously deficient in a key element for victory: the likeability factor.

By Myrna Blyth
Reprinted with permission from National Review Online