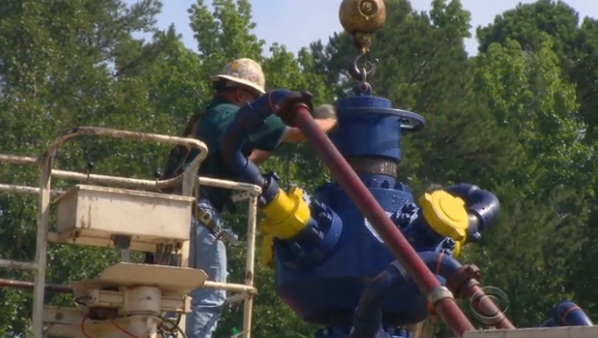 OKLAHOMA-- After a swarm of small earthquakes in Oklahoma, the state ordered oil drillers on Monday to reduce the amount of waste water they inject into the ground.

Oklahoma -- not California -- is now America's earthquake capital. Until 2008, the state averaged one or two a year. Now it's almost three a day.

Gillette hugged a co-worker as it hit.

"I thought I was going to fall and there was a lot of stuff that fell off the shelves," she recalled.

Oklahoma keeps breaking records for earthquakes with a magnitude of 3.0 or higher. More than 900 last year alone.

Most geologists connect the spike in earthquakes to the state's oil and gas industry -- and its disposal of massive amounts of water into underground caverns.

"So we produce oil and gas we have excess saltwater. We dispose it at depth, so it did not interfere with freshwater we are drinking," explained Geologist Todd Halihan who teaches at Oklahoma State. "Unfortunately, there is a side effect. Now we are generating seismicity due to the injection wells. These are pretty startling when your field them."

The industry says there's no proof. Gillette isn't taking sides. She just wants it to stop.

One geologist CBS News spoke to said no question, something has reactivated fault-lines here. Those fault-lines had been dormant for 300 million years.

EDITOR'S NOTE: An earlier version of this story confused the process of injecting waste water into waste water wells with fracking. The state on Monday ordered oil drillers on Monday to reduce the massive amount of waste water disposed of into underground caverns. This is a separate process from fracking, which was not affected by Monday's order. CBS News regrets the error.

Afghan women fear for their safety under Taliban rule