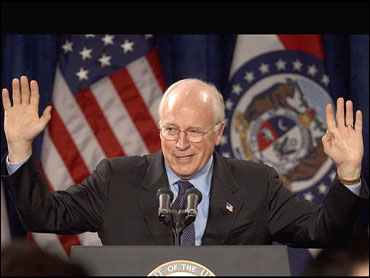 
Sinister. That word keeps cropping up in descriptions of Dick Cheney's public countenance.

I don't quite understand how or why this came to pass. But I'm now suspicious that it's a plot. Maybe the image wizards at the White House figured out that in post-9/11 America, having a dark, secretive, powerful sorcerer behind the throne was the perfect tactic to create awe and obedience amongst us Muggles.

After all, Dick Cheney didn't used to be Dr. Strangelove.

As a congressman and Defense Secretary, Cheney was actually a pretty fun guy. He was open with the press, relatively spin-free for his peer group and popular for the deadpan wisecracks issued from his famously curled mouth. He was a Republican that Democrats liked. Republicans did too.

As the choice for veep in 2000, he was the opposite of scary; he was seen as a soothing selection: wise, unflappable, hardboiled, heavy. It was Bush who suffered in comparison to the uber-competent Cheney. The joke was that Papa Bush's cronies sent Cheney in to watch over Junior, mentor him and mind the till. Now he's the bogeyman.

The transformation is so odd that it really isn't totally crackpot to wonder if it was intentional.

Is the "undisclosed location" business still necessary? Was it ever? Why does such a careful man, such a team player, persist in making claims about Saddam's Iraq that would be considered "off the reservation" from other players? Why is one of the administration's most agile advocates kept away from the press? Why is it that he emerges most often for fundraisers, playing right into the paid-for-by-Halliburton image? Maybe that's the image they want: these are calculating people.

It is an image that is causing mild heartburn for some Republicans thinking about November, enough to fuel a boomlet of speculation, wishful thinking and mischievous gossip that Cheney might get dumped from the ticket. Replacement names have been floated: Bill Frist, Colin Powell, Tom Ridge, Condoleezza Rice, Rudy Giuliani, George Pataki, John McCain and Tommy Thompson.

The smart money says that will never happen. But smart money has been dumb this year in politics. Who knows?

What does seem important is that conservatives and Republicans who like Cheney are worried that he is personifying unpopular qualities of this administration and is a liability outside of their world.

The precipitating event, strangely enough, was one of the rare interviews Cheney submitted to, this time with National Public Radio in January. He resurrected two controversial and suspect claims that the administration had abandoned. He said, again, that there was "overwhelming evidence that there was a connection between al Qaeda and the Iraqi government." Meanwhile, Colin Powell had just said he didn't know of any "smoking gun, concrete evidence" of such a connection.

Cheney also claimed that two trailers found after the war provided "conclusive evidence" that Iraq had a biological weapons program. This is in direct opposition to what the CIA's chief weapons inspector, David Kay, concluded.

This was something of tipping point in the "Is Cheney a liability?" indictment. But there is a long list of other counts.

They began with Cheney's refusal to give Congress and the General Accounting Office a list of who his energy task force had consulted with and heard from. Cheney has consistently said this was a principled battle to preserve executive powers that Congress was eroding; his critics consistently said it was classic stonewalling to conceal the influence of Cheney's old business colleagues. That lawsuit is headed to the Supreme Court.

Then Halliburton, where Cheney earned $44 million in five years, acquired huge no-bid contracts to rebuild Iraq's oil operations. In Iraq, Halliburton has been accused of overcharging the Pentagon for fuel and admitted that two former employees had taken kickbacks.

After the war, in September of 2003, Cheney implied quite strongly that Iraq was involved in 9/11. Bush himself had to clear that one up, declaring the administration "had no evidence that Saddam Hussein was involved" in those attacks.

Also after the war, reporting revealed just how deeply Cheney was involved in assessing, interpreting and editing pre-war intelligence on Iraq, working closely with the Pentagon's shadow espionage think tank, the Office of Special Programs.

Now, the criminal investigation of the potentially illegal leak of the name of a CIA employee, and wife of a Bush critic, to columnist Robert Novak is supposedly honing in on some Cheney staffers.

And to complete the circle, Cheney is getting walloped for taking Justice Antonin Scalia duck-hunting in Louisiana with some oilmen. Scalia will be hearing the energy task force case.

Finally, and perhaps most importantly over at the White House, a CNN/Time poll found that 42 percent thought Cheney should be yanked from the ticket.

Cheney is a full-fledged evildoer to many Democrats and Bush-haters. He is problematic for Republican strategists. But he is deeply supported by many Republicans who see him as the most reliable and influential guardian of the conservative torch. And he is very important to the Hobbesians: generally conservative intellectuals who believe that Democrats, liberals and internationalists profoundly underestimate how dangerous and belligerent the world is, especially the Islamic world today.

The most disciplined, "on message" White House in memory seems uninterested in reshaping Cheney's public image and style. I guess that means they like it. It's an image very different from his earlier political incarnations. The reasons for that transformation remain in an undisclosed location.

Must Everyone Speak English?