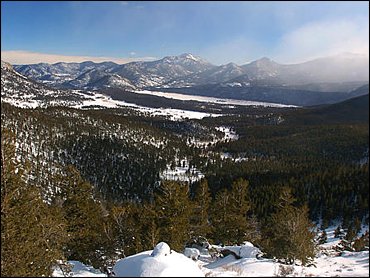 
Who wins the White House may depend on an upcoming ballot initiative in Colorado. If passed, the Nov. 2 measure would split the state's electoral votes instead of awarding them on a winner-take-all basis, which could swing the election to Democratic candidate John Kerry.

If the initiative had been in place in 2000, Al Gore would be president today. If it passes on Election Day 2004, it takes effect immediately. And in a presidential race expected to be another photo finish, as Colorado goes, so could the nation.

Maine and Nebraska partially divide their electoral votes based on state totals and winners in congressional districts. But Colorado would split all its electoral votes, based solely on the popular vote.

If Amendment 36 passes, the Rocky Mountain State's nine electoral votes will likely be divided five for President Bush and four for Kerry, according to current polling.

In 2000, Mr. Bush won Colorado 51 to 42 percent, which under the math of Amendment 36, would have meant three electoral votes for Gore. Subtract those three from Mr. Bush's total of 271 and add to Gore's total of 266, and the election would have gone to the Democrats. (The allotment is three because Colorado had eight electoral votes in 2000.)

The Electoral College was originally crafted as a compromise between constitutional framers who favored Congress electing the president and others who preferred an election by popular vote. It was intended, in part, to hedge concerns that Americans would instinctively support their region's "favorite son" instead of looking to a national candidate.

There are three instances in U.S. history where candidates have lost the popular vote but won the presidency through the Electoral College, most recently, George W. Bush in 2000.

Rick Ridder doesn't want it to happen a fourth time. A Denver-based Democratic consultant, Ridder led the effort to get Amendment 36 on the Colorado ballot.

"I think it is a first step to reforming the Electoral College," Ridder says, adding that, "ultimately this is about making sure every voice is heard."

Detractors point out that the founding fathers' concern that the electorate would not be sufficiently informed to avoid defaulting to local candidates has been offset by the far reach of national news and political advertising.

Proponents argue that the Electoral College insures that the president represents the broad array of states and not simply localities with high populations.

To be sure, if the Electoral College were abolished President Bush would be campaigning in California more often than Colorado. But Mr. Bush wasn't in Los Angeles on Monday; he was holding rallies in Denver and Morrison, Colorado.

Colorado Gov. Bill Owens, a Republican, argues that if Amendment 36 passes the state's pertinence in future presidential campaigns would be reduced.

"For us to go from having nine electoral votes to having one electoral vote in the vast majority of presidential elections would diminish our ability compared to other states substantially," Owens told the Rocky Mountain News.

The Denver Post agrees. In an editorial published Sunday, the newspaper wrote that, "Amendment 36 presents a tempting blueprint for making presidential elections a more modern and more equitable process." But, it continued, "Colorado has nothing to gain and much to lose by being the one state that splits the statewide vote for president."

Republicans outnumber Democrats in Colorado, as well as nonaligned voters. The GOP won the last two presidential races there, and likely would have won in 1992 if independent candidate Ross Perot had not been on the ballot.

Today, though the state still leans Republican, Kerry remains a viable candidate. The two most recent polls in Colorado are a mixed bag: the Mason-Dixon poll shows Mr. Bush ahead by 9 points while the CNN/USA Today/Gallup shows a dead heat.

Among Colorado politicians, support is mostly split along party lines; Democrats favor it because the state is likely to go for President Bush, while Republicans oppose it. Both sides have well-funded surrogate groups representing their positions.

In Maine and Nebraska, the two states that currently divide their electoral votes, the statewide winner automatically gets two votes and the rest are allocated to the candidate who wins each congressional district.

Neither state has ever split its votes. Polling suggests that this year Nebraska's five electoral votes will again go to Mr. Bush. Three of Maine's four votes are expected to go to Kerry, but the remaining vote may be up for grabs.

"We already see that candidates are fighting over one electoral vote in Maine," Ridder says.

Indeed, both President Bush and Sen. Kerry are currently vying for the one electoral vote that goes to the winner of Maine's 2nd congressional district.

In a nail-bitter of an election, one electoral vote matters. And the potential that Colorado could give four to the state's loser has both national parties paying attention.