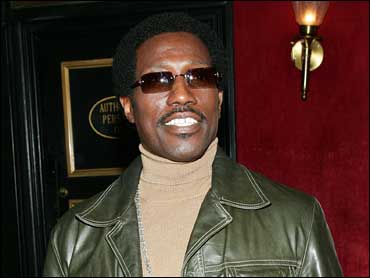 Wesley Snipes and two other men have been charged with conspiracy to defraud the IRS and a fraudulent claim for payment to the IRS, officials from the Internal Revenue Service announced Tuesday.

The actor could face a maximum of five years in prison for each of the charges.

Snipes, who has starred in films such as "Blade" and "White Men Can't Jump," is also charged with six counts of failing to file income tax returns. He faces up to one year in prison on each count.

A grand jury indicted Snipes last Thursday and a warrant for his arrest was issued Friday, according to Steve Cole, a spokesman for the U.S. Attorneys Office in Tampa.

"We have not heard from Mr. Snipes," Cole told The ShowBuzz Tuesday afternoon. "The indictment was unsealed today with the arrest of Mr. Rosile who turned himself in to U.S. Marshals in Ocala, Florida."

Cole said Rosile appeared in federal court on Tuesday in Ocala and was released on his own recognizance.

According to the indictment, Kahn was the founder and leader of American Rights Litigators (ARL) and its successor, Guiding Light of God Ministries (GLGM).

It is alleged that ARL and GLGM were for-profit, commercial businesses that promoted and sold fraudulent tax schemes designed to impede the administration of IRS laws.

The indictment alleges that Rosile was a CPA but continued to work as an accountant after his licenses in Ohio and Florida were revoked and allegedly prepared fraudulent returns for members of American Rights Litigators using the so-called "861 argument."

Authorities alleges that that Snipes, Kahn and Rosile knew the "861 argument," which says that U.S. citizens and residents can be taxed only on income derived from certain foreign-based activities and not on wages and other income earned within the United States, was false.

"Our system of government depends on citizens paying their fair share of taxes," stated U.S Attorney for the Middle District of Florida Paul Perez. "Those who intentionally and unlawfully harass the IRS through deceit, trickery and fraud undermine the collection of revenue that is vital to every aspect of the operation of our government, including defense, the war on terror, health care, law enforcement and education."

The case is being investigated by the IRS Criminal Investigation.

Trevor Noah praises Black women as he signs off "The Daily Show"
Thanks for reading CBS NEWS.
Create your free account or log in
for more features.
View CBS News In
CBS News App Open
Chrome Safari Continue
Be the first to know
Get browser notifications for breaking news, live events, and exclusive reporting.