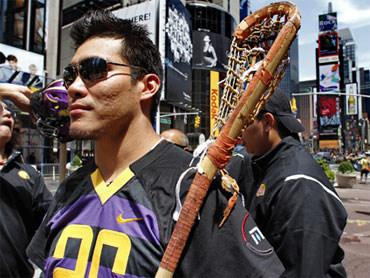 The teams participating in the World Lacrosse Championships in England represent 30 nations, from Argentina to Latvia to South Korea to Iroquois.

The Iroquois helped invent lacrosse and, in a rare example of international recognition of American Indian sovereignty, they participate at every tournament as a separate nation. But they might not be at this year's world championship tournament because of a dispute over the validity of their passports.

The 23 players have passports issued by the Iroquois Confederacy, a group of six Indian nations overseeing land that stretches from upstate New York into Ontario, Canada.

The U.S. government says it will only let players back into the country if they have U.S. passports, a team official said. The British government, meanwhile, won't give the players visas if they cannot guarantee they'll be allowed to go home, the official said.

Iroquois team members born within U.S. borders have been offered U.S. passports, but the players refuse to carry them, because they see the government-issued documents as an attack on their identity, said Tonya Gonnella Frichner, a member of the Onondaga Nation who works with the team.

"It's about sovereignty, citizenship and self-identification," said Frichner, who also is the North American Regional Representative to the U.N. Permanent Forum on Indigenous Issues.

The Iroquois have used their own passports in the past, but State Department spokesman P.J. Crowley said the new dispute can be traced to the Western Hemisphere Travel Initiative, which went into effect last year. The new rules require, among other things, that Americans carry passports or high-tech documents to cross the country's borders.

"Since they last traveled on their own passports, the requirements in terms of the kind of documents that are necessary to facilitate travel within and outside the hemisphere have changed," Crowley said. "We are trying to help them get the appropriate travel documents so they can travel to this tournament."

Tribes' efforts to meet the new security requirements have been ongoing. A group of American Indian leaders requested funding from the Department of Homeland Security in 2009 to develop cards that would comply with the new rules, according to an agency document. Idaho's Kootenai tribe and U.S. Customs and Border Protection agreed last year to develop the first enhanced tribal card acceptable under the new guidelines.

Asked whether the Iroquois passport could be acceptably modified to meet the stricter standards, Crowley referred questions to the Department of Homeland Security.

That agency declined to discuss the specifics of the case. Matt Chandler, a Homeland Security spokesman, said his agency was working with the Department of State and others to resolve the issue.

One Iroquois player, Brett Bucktooth, said he would rather miss the tournament than travel under a U.S. passport.

"That's the people we are, and that's our identity," he said.

Bucktooth, 27, also spoke of his deep cultural and personal connection with lacrosse - first played by Iroquois and Huron, perhaps as early as 1,000 years ago.

Bucktooth and other Iroquois see lacrosse as a gift to the tribes from their creator. Lacrosse was played by American Indians as a preparation for war and "to resolve conflicts, heal the sick, and develop strong, virile men," according to US Lacrosse, the American governing body of the sport.

Today, the Iroquois team is ranked No. 4 by the Federation of International Lacrosse and represents the Haudenosaunee - an Iroquois Confederacy of the Oneida, Seneca, Mohawk, Tuscarora, Cayuga and Onondaga nations. About 90,000 Haudenosaunee, or "the people of the longhouse," live today in New York, Wisconsin, Oklahoma and the Canadian provinces of Quebec and Ontario, said Onondaga chief Oren Lyons.

The Iroquois team was scheduled to play at the 2010 World Lacrosse Championship that starts Thursday in Manchester, England.

The Iroquois team and its entourage of 25 - coaches, staff and family members - would have to leave New York by Tuesday evening at the latest to participate in the tournament, which is staged every four years.

The team has been traveling on Iroquois passports for the past 20 years, and Iroquois passport-holders have been using them to go abroad since 1977, said Denise Waterman, a member of the team's board of directors. Within the last year, colleagues used their Iroquois passports to travel to Japan and Sweden without any problems, she said.

In the past, U.S. immigration officials accepted the Iroquois passports when they obtained visas - including for trips to Britain in 1985 and 1994, and as recently as 2002 to Australia. The 2006 tournament was held in Canada.

Members of the Western Shoshonee and Hopi nations also have traveled internationally using similar passports, some within the last few months, said Valerie Taliman, a publicist for the Iroquois team.

"As a governor of a state with a significant Native American population, I know many tribes and pueblos will watch carefully how these young competitors are treated by the administration," he wrote.

Rep. Louise Slaughter, D-N.Y., reached out to White House officials on Monday on behalf of the team, Frichner said.

Last week, the Iroquois team learned from a State Department official that the U.S. government would not allow it to return on its Haudenosaunee-issued passports, according to Frichner. The British Consulate in New York said it could only issue visas after receiving "a written confirmation from the Department of Homeland Security that you can leave the country and come back," she said.

Team officials went to the British Consulate in New York on Monday to reapply for the visas and plead their case, but were turned away. Later in the day, the English Lacrosse Association said in a statement it expected "the Iroquois will arrive on time for the opening ceremony and games."

After fighting off attempts at assimilation for more than a century, issues of sovereignty strike a deep chord for many Native Americans, said Dean Kotlowski, a history professor at Salisbury University in Maryland who specializes in American Indian policy.

"What's at stake is their culture, their identity, their tribes, their reservations," he said. "They've seen diminishment ... of their population, threats to their way of life."

The Iroquois team was in Manhattan on Monday as it awaited news of its status. It has been training on Staten Island in New York City, using the football field at Wagner College.