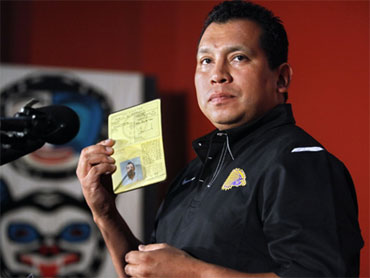 An American Indian lacrosse team whose Iroquois-issued passports have been at the heart of an international dispute will default on the first game of the sport's world championship.

Still, organizers said Thursday the Iroquois Nationals are holding out hope they'll be allowed into England to compete in a second game.

The team remains at a New York City hotel hours before the start of what was to be their first game of the tournament. Executive Director Percy Abrams says they "have a lot of high-level calls out for help."

The British government said Wednesday the team wouldn't be allowed in to play the sport the Iroquois helped invent unless members accept U.S. or Canadian passports.

The 23 members are all eligible for those passports but say accepting them would be a strike against their identity. The U.S. State Department gave the team a one-time waiver to help them get to the tourney.

He said it was made clear to the British officials that although the lacrosse team members would not be traveling on U.S. passports, they would be allowed to re-enter the U.S. when their visit to Britain was completed.

Nonetheless the British government decided to bar entry for the team members, Crowley said. He described the decision as unsurprising, and he said both governments share the view that ultimately the Iroquois must have internationally recognized travel documents.