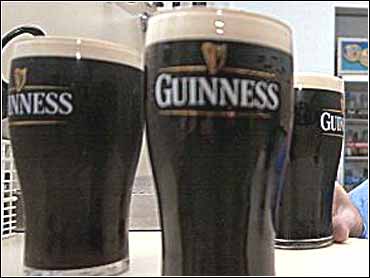 Ireland's national police force has arrested two men in connection with an audacious robbery last week on the landmark Guinness Brewery in Dublin - but said Thursday they were still looking others involved in the beer banditry.

The Garda Siochana police force declined to specify how many kegs have been recovered following the Nov. 29 raid, when a lone man drove a truck into the brewery, hitched up a trailer loaded with 450 kegs and drove straight out through the security gate into rush-hour traffic. Guinness called it the biggest robbery in the 248-year history of the brewery.

Police said they recovered an unspecified volume of the stolen beer Monday at an undisclosed location in County Meath, northwest of Dublin, and arrested two men Tuesday on suspicion of involvement with the theft.

Police said one man was charged Wednesday with possessing stolen property and received bail pending his arraignment in Kilmainham District Court, west Dublin, on Dec. 21 - an unusual delay that reflected detectives' desire to keep looking for others involved in the robbery before showing their hand in court.

The other man was released Wednesday without charge. But police said he was suspected of lesser involvement in the robbery and a file of evidence was sent to the state prosecutors' office, a common practice in Ireland.

The Garda Siochana said it would not release any details about the two men, their alleged involvement, the location of the recovered kegs or how much of the beer booty remained at large, saying it could make it harder to catch others involved in the raid.

Irish detectives sometimes put bailed suspects under surveillance in hopes that they might help police to identify others involved in a particular crime.

The stolen trailer was loaded up with 180 kegs of Guinness stout, 180 kegs of brand Budweiser and 90 kegs of Danish brand Carlsberg. Guinness has a contract to brew and distribute those beers in Ireland.

Each keg holds about 88 British-sized pints, the most common serving size in Ireland - about 20 ounces each. The total theft involves 39,600 pints with a retail value exceeding $235,000.

The Republic of Ireland, a country of 4.2 million, has more than 10,000 pubs and bars. The Guinness brewery in Dublin is the biggest supplier, producing more than 5 million kegs annually.