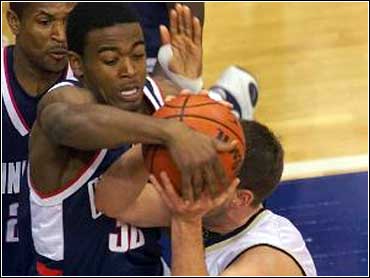 The Huskies beat Notre Dame on the floor. They lost to the Irish at the line.

Notre Dame made 21 free throws shots while the 13th-ranked Huskies took just three Saturday as the Irish beat Connecticut 68-66, completing their first sweep of the Huskies since joining the Big East Conference.

"The most frustrating thing is shoot 56 percent, win by 17 on the floor and lose," said Connecticut coach Jim Calhoun, who made repeated veiled comments about the officiating in his post-game comments. "There really is no significant stat that would tell you one team outplayed the other team but one."

After the Huskies left the floor, the student section rushed the court, hoisting a tearful Matt Doherty onto their shoulders as the first-year Notre Dame coach pumped his first at the sellout crowd.

"As neat as it was to have the students lift me up after the game, it was those guys who deserved to be lifted up," said Doherty, who had to encourage students to rush the court after Notre Dame beat then-No. 23 St. John's two weeks ago. "I wish they'd have got it, but there's a lot of more poundage between 13 guys than one coach."

Troy Murphy torched Connecticut (17-6, 6-4 Big East) for 33 points and 16 rebounds in Notre Dame's 75-70 upset of the Huskies in the Big East opener. So the Huskies took what has become the most popular approach to defending the Big East's leading scorer beat on him constantly.

Murphy, who averages 23.2 points a game, had two players on him almost every shot he took in the post and played most of the game with blood on his jersey. The Huskies harassed him into shooting 5-for-20 from the floor, including 0-for-6 from 3-point range, though he managed a team-high 18 points and 10 rebouds.

"I could shot 0-for-50 and we could still beat the defending national champions," Murphy said. "I wasn't hitting my shots, but other guys stepped it up and took a lot of the stuff off me."

Connecticut's tactic with Murphy came at a price. Jake Voskuhl was limited to six minutes in the first half and wasn't a factor except in contributing to Connecticut's 24 team fouls. He finished with four points.

The strategy also put Murphy at the free-throw line, where he was 8-of-8 as the Irish shot 21-of-28 from the line.

Meanwhile, Notre Dame was called for 10 fouls and the Huskies didn't shoot their first free throw until 4:46 left in the game, when Kevin Freeman converted a three-point play, cutting Notre Dame's lead to 60-57.

"I thought we did a great job on him," Calhoun said. "But I was in the minority. There were three other guys who didn't think we did."

Voskuhl fouled out on Notre Dame's next possession, sending Ivan Kartelo to the line to shoot two. He converted the first, but Ajou Deng lost the rebound out of bounds, giving the ball back to Notre Dame.

Khalid El-Amin then fouled Matt Carroll, and the freshman hit both free throws for a 67-64 Notre Dame lead with 28.3 seconds left.

After Freeman hit a shot from the top of the key that the referees ruled a two-point shot, Carroll hit another free throw to put Notre Dame up 68-66. Kartelo then cleanly blocked Albert Mouring's 3-point attempt in a crowd to preserve the win.

Mouring and Freeman each scored 18 points for the Huskies, while El-Amin was 3-of-11 from the field and finished with eight points, 9.5 below his average.