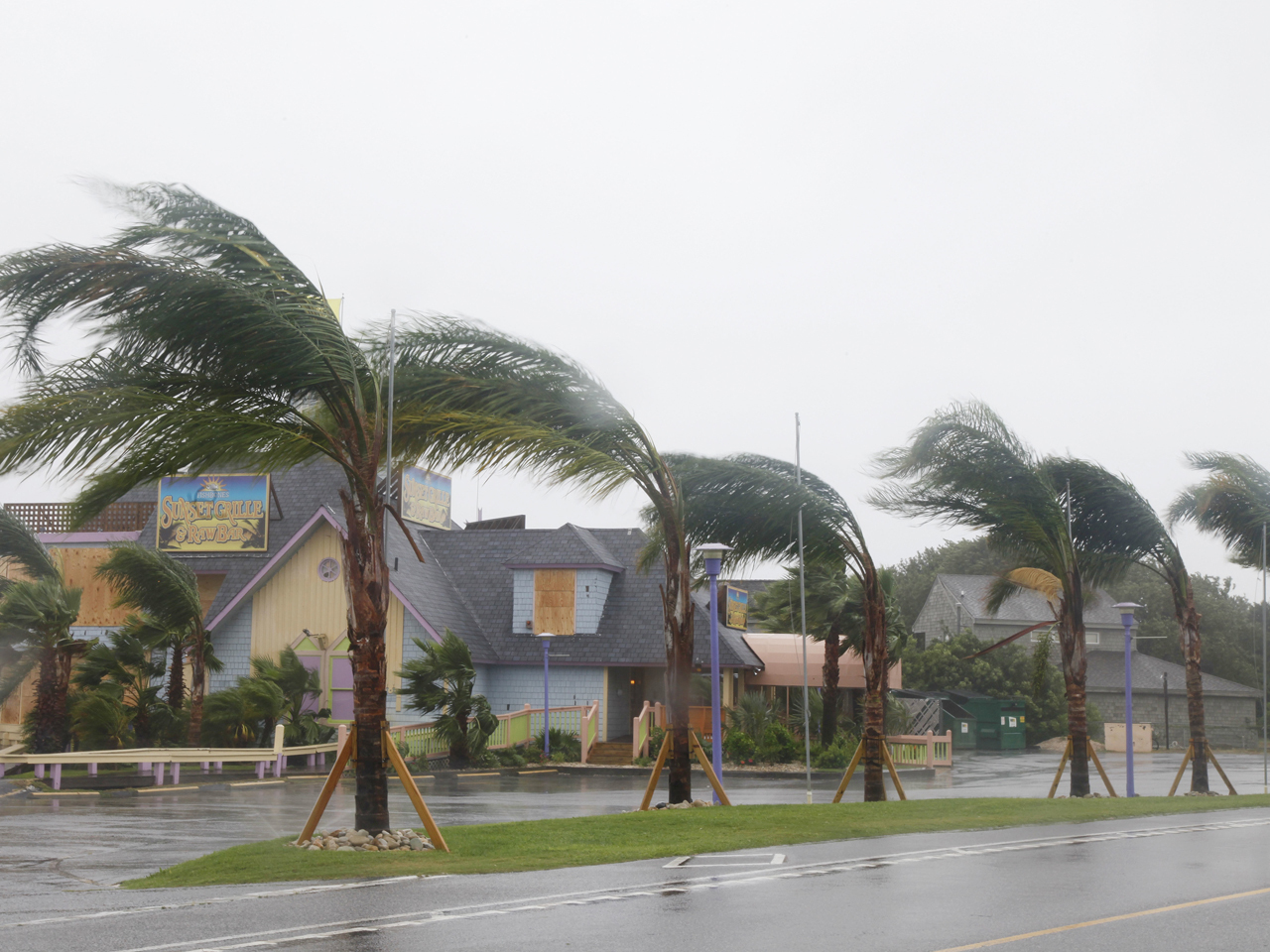 MOREHEAD CITY, N.C. - Hurricane Irene made landfall on the Outer Banks of North Carolina about 7:30 a.m. ET Saturday morning, losing some power but still whipping up sustained winds of 85 mph, as it continued its run up the Eastern Seaboard.

The National Hurricane Center said the eye of the enormous Category 1 storm passed over Cape Lookout, with winds slipping a bit from 100 mph overnight, but warned Irene would remain a hurricane as it moves up the mid-Atlantic coast.

At 2 p.m. ET Irene was about 45 miles west northwest of Cape Hatteras, N.C., and about 95 miles south of Norfolk, Va. The storm was moving north-northeastward at 15 mph.

Perdue said Saturday that hundreds of National Guard troops and Highway Patrol officers are standing by to help as needed, and Perdue said state officials are ready to do a damage assessment once the weather clears.

Perdue also said more than 80 shelters were available and more than 7,500 people used them overnight.

Two piers along North Carolina's southern Outer Banks have been damaged. Emerald Isle town manager Frank Rush says the end of Bogue Inlet Pier collapsed. In addition, part of the pier behind the Sheraton Hotel in Atlantic Beach has collapsed.

As the storm's outer bands of wind and rain lashed the North Carolina coast, knocking out power, authorities farther north begged people to get out of harm's way. Officials in the northeast, not used to tropical weather, feared it could wreak devastation.

"Don't wait. Don't delay," said President Obama, who decided to cut short his summer vacation by a day and return to Washington. "I cannot stress this highly enough: If you are in the projected path of this hurricane, you have to take precautions now."

A coastal town official in North Carolina said witnesses believed a tornado spawned by Irene lifted the roof off the warehouse of a car dealership in Belhaven on Friday night and damaged a mobile home, an outbuilding and trees.

Forecasters said the core of Irene would pass near or over the North Carolina coast Saturday morning, roll along the mid-Atlantic coast Saturday night and move over southern New England on Sunday.

Hurricane warnings were issued from North Carolina to New York, and watches were posted farther north, on the islands of Nantucket and Martha's Vineyard off Massachusetts. Evacuation orders covered at least 2.3 million people, including 1 million in New Jersey, 315,000 in Maryland, 300,000 in North Carolina, 200,000 in Virginia and 100,000 in Delaware.

A tropical storm warning is in effect as far north as Fort Lawrence, Canada.

"This is probably the largest number of people that have been threatened by a single hurricane in the United States," said Jay Baker, a geography professor at Florida State University.

U.S. airlines canceled at least 6,100 flights through Monday, grounding hundreds of thousands of passengers as the storm could strike major airports from Washington to Boston.

New York City ordered more than 370,000 people who live in flood-prone areas to leave, including Battery Park City at the southern tip of Manhattan, Coney Island and the beachfront Rockaways. But it was not clear how many would do it, how they would get out or where they would go. Most New Yorkers don't have a car. Mayor Michael Bloomberg says 1,400 people are staying in shelters.

The city said it would shut down the subways and buses at noon Saturday, only a few hours after the first rain is expected to fall. The transit system carries about 5 million people on an average weekday, fewer on weekends. It has been shut down several times before, including during a transit workers' strike in 2005 and after the Sept. 11 attacks a decade ago, but never for weather.

Aviation officials said they would close the five main New York City-area airports to arriving domestic and international flights beginning at noon on Saturday. Many departures also were canceled.

Mayor Michael Bloomberg said there was little authorities could do to force people to leave and warned: "But if you don't follow this, people may die."

Shelters were opening Friday afternoon, and the city was placed under its first hurricane warning since 1985.

Transit systems in New Jersey and Philadelphia also announced plans to shut down, and Washington declared a state of emergency.

Some hardy holdouts in North Carolina put plywood on windows, gathered last-minute supplies and tied down boats. More than half the people who live on two remote islands, Hatteras and Ocracoke, had ignored orders to leave, and as time to change their minds ran short, officials ordered dozens of body bags. The last ferry from Ocracoke left at 4 p.m. Friday.

"I anticipate we're going to have people floating on the streets, and I don't want to leave them lying there," said Richard Marlin, fire chief for one of the seven villages on Hatteras. "The Coast Guard will either be pulling people off their roofs like in Katrina or we'll be scraping them out of their yards."

Some took to shelters for protection.

Officer Edward Mann was driving down the narrow streets of Nags Head looking for cars in driveways, a telltale sign of people planning to ride out the storm against all advice.

Susan Kinchen, her daughter and 5-month-old granddaughter came to West Carteret High School with about 50 others. She said they didn't feel safe in their trailer, and the Louisiana native was reminded of how her old trailer lost its roof to Hurricane Katrina, almost six years ago to the day, on Aug. 29, 2005.

"We live in a trailer with her," said Kinchen, referring to the infant. "I'm not taking any chances."

After the Outer Banks, the next target for Irene was the Hampton Roads region of southeast Virginia, a jagged network of inlets and rivers that floods easily. Emergency officials have said the region is more threatened by storm surge, the high waves that accompany a storm, than wind. Gas stations there were low on fuel Friday, and grocery stores scrambled to keep water and bread on the shelves.

In Delaware, Gov. Jack Markell ordered an evacuation of coastal areas on the peninsula the state shares with Maryland and Virginia.

Kenneth Roe was filling up three 5-gallon gas cans at an Exxon station in Salisbury, Md., on Friday night. A manager at a Home Depot in Lewes, Del., the 34-year-old had worked 18 hours straight on Thursday and another five hours on Friday, his day off. He said the store was staying open 24 hours in order to provide supplies and that generators in particular were in high demand. Approximately 50 generators put out at 6 a.m. were gone by 8 a.m., he said, even though each cost $600.

"We're going to get something no matter what," he said of the effects of the storm.

In Baltimore's Fells Point neighborhood, one of the city's oldest waterfront neighborhoods, people filled sandbags and placed them at the entrances to buildings. A few miles away at the Port of Baltimore, vehicles and cranes continued to unload huge cargo ships that were rushing to offload and get away from the storm.

In New York, the Mets postponed games scheduled for Saturday and Sunday with the visiting Atlanta Braves. The Jets and Giants moved their preseason NFL game up to 2 p.m. Saturday from 7 p.m., but then postponed it until Monday.

And in Atlantic City, N.J., all 11 casinos announced plans to shut down Friday, only the third time that has happened in the 33-year history of legalized gambling in that state.

"I like gambling, but you don't play with this," Pearson Callender said as he waited for a Greyhound bus out of town. "People are saying this is an act of God. I just need to get home to be with my family."