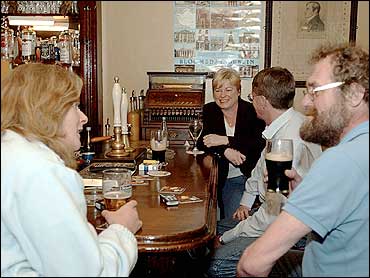 Alarmed that Ireland has become one of the hardest-drinking countries in Europe, the government announced Monday it plans to require health warnings on alcoholic drinks and limit liquor ads that invade every corner of Irish life.

Prime Minister Bertie Ahern insisted in a speech to European brewers in Dublin that young people shouldn't be exposed to saturation marketing of alcohol, which he said was fueling a new "drink to get drunk" culture in a country where the pub has been the hub of life for generations.

To that end, he said, the government plans to ban alcohol ads from buses, trains, cinemas and sporting events involving young people, while no ads for beer or other alcoholic beverages would be permitted before 10 p.m. on Irish television.

Such ads currently face few restrictions — and adorn just about every public space and event brochure in Ireland, where more than 10,000 pubs serve a population of 3.8 million. The Irish brewing giant Guinness sponsors the national soccer squad, while Heineken has the rugby team.

Efforts to slap health warnings on beer, wine and liquor would require approval from the European Commission, the executive arm of the European Union, Ahern said. But Ahern said he expected the EU's support in tackling what he called "serious social problems arising from greatly increased levels of alcohol abuse."

Together, the commitments represent as significant a shift in official attitudes to Irish traditions as the government's recent commitment to outlaw smoking in pubs. That ban is supposed to begin Jan. 1.

Anti-alcohol campaigners and Ireland's major pub owners association welcomed the moves, as well as Ahern's call for pubs to stop selling sweet, heavy-alcohol "slammers" and "alcopops," which appeal to novice drinkers. The legal drinking age is 18.

"These drinks encourage binge drinking among young people which is fast becoming the curse of modern society," said Tadh O'Sullivan, chief executive of the Vintners Federation of Ireland, which represents 6,000 pubs — many of which sell the drinks.

The Irish have long been stereotyped as heavy drinkers, but past surveys have suggested the reputation was undeserved and Ireland was actually one of Europe's more moderate drinking nations. In the past decade, however, figures show that has changed and Ireland has become a leading alcohol consumer.

The surge coincides with Ireland's quick-changing fortunes in the 1990s, when it went from an economic backwater of Europe with double-digit unemployment to a booming economy. The boom boosted stress levels and disposable income in a country where the pub remains the social hub.

A 1999 European Union-funded survey placed Ireland top among the 15 EU nations in terms of the percentage of citizens who consider themselves regular drinkers — 51.5 percent. A World Drinks Trends survey in 2002 placed Ireland second only to tiny Luxembourg among EU members in per-capita volume of alcohol consumed, at 2.85 gallons of pure alcohol each year. The United States average was 1.77 gallons.

Among the defiant minority who have shunned a social life built around pints of stout, Ahern's latest commitments hit the spot.

The group was founded in the 19th century to discourage drinking and today has more than 170,000 members in the Republic of Ireland and neighboring Northern Ireland — all of whom have pledged not to drink a drop.

"It's headline-grabbing and a smoke screen for the real crisis in the health service," said Gerry Crawford, manager of the Brazen Head, Ireland's oldest pub with its origins beside the River Liffey going back to 1198.

"I'm much more concerned about the fact that a 17-year-old girl who breaks her arm has to wait 10 or 12 hours for a hospital bed, not whether she's been drinking," he said. "I didn't drink when I was a teenager. Whether today's kids do or not is a matter of parental influence."