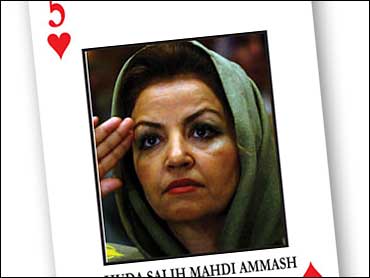 Huda Salih Mahdi Ammash, among the 55 most wanted members of Saddam Hussein's fallen regime, was taken into custody on Sunday, a Defense Department official said. He had no other details about her detention.

Officials have not yet found any weapons of mass destruction — which the Bush administration cited as justification for the war in Iraq — and have said they need information from Iraqis to help find them.

It was unclear how much cooperation they would get from Ammash, since all other high-ranking officials have denied under interrogation that there was such a program in recent year.

With her detention, the United States has now acknowledged holding 19 of the 55 most wanted.

U.S. intelligence officials said that Ammash, 49, is believed to have played a key role in rebuilding Baghdad's biological weapons capability since the first Persian Gulf War in 1991.

Born in 1953 in Baghdad, her father was Salih Magdi Ammash, a former vice president, defense minister and member of the Baath Party's leadership. Saddam reportedly ordered his execution in 1983.

She has served as president of Iraqi's microbiology society and as dean at University of Baghdad.

Ammash and al-Hindawi are among Iraq's top weapons scientists. Others include Amir al-Saadi, a chief chemical weapons researcher, and Dr. Rihab Taha, a woman who was dubbed "Dr. Germ" by inspectors. Ammash is the only woman on the most-wanted list.

In 2001, she became the first and only woman elected to the highest policymaking body in the Baath Party, the regional command, after working closely with Saddam's youngest son, Qusai.

American officials say Ammash is among a new generation of leaders named by Saddam to leading posts within Iraq's Baath party.

On the Pentagon's list the 55 most wanted, she is number 53 and referred to as the party's Youth and Trade Bureau Chairman. She played a role in organizing Baath activities in Jordan, Lebanon and Yemen, officials said.

In one of several videos of Saddam released during the war, Ammash was the only woman among about a half-dozen men seated around a table. The videos were used as Iraqi propaganda as invading forces drew closer to Baghdad and it was not known when the meeting happened or what was the significance of her presence there.

He said there is little chance that the weapons will be found independently, or that top officials will provide useful information.

U.S. Central Command announced Friday that the director of Iraq's office of military industrialization and one of Iraq's two vice presidents had been taken into custody by the U.S.-led military coalition.

In a brief statement, Central Command identified the detained men as Abd al Tawab Mullah Huwaysh, director of the Office of Military Industrialization, and Taha Muhie-eldin Marouf, an Iraqi vice president and member of the Revolutionary Command Council.

The statement did not give details of where the men were detained, where they were being held or whether they surrendered or were seized.

Huwaysh was listed as No. 16 and the 10 of hearts on the coalition's list of the 55 most-wanted figures from Saddam's regime and Maruf was No. 42 and the nine of diamonds, CENTCOM spokesman Lt. Herb Josey told CBS News Radio.

The statement came several hours after the announcement at the U.S. Army's V Corps headquarters that Mizban Khadr Hadi, a member of Saddam's Revolutionary Command Council and a top Baath Party leader, was captured Thursday in the area of Baghdad controlled by the U.S. Army's 3rd Infantry Division.