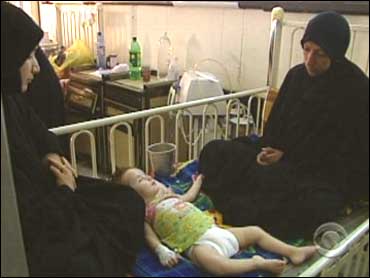 In the five short minutes it takes Dr. Haider Rashid to examine a patient, Iraq will have pumped more than a million dollars worth of oil - more than $300 million worth every day, CBS News correspondent Elizabeth Palmer reports.

But you wouldn't know it looking at the dingy emergency room of the Kahdimiyah Hospital.

U.S. Army doctors say it's one of the best in the city - yet it lacks the most basic supplies.

Anaesthetic is also lacking. One man had his foot stitched up with nothing to kill the pain but his son's embrace.

"How do you reconcile the fact that we know that Iraq has many billions of dollars of oil money waiting to be spent?" Palmer asked.

Bassim Sharif does. He's a Member of Parliament on the Health Oversight Committee.

But corruption is only part of the problem. Political in-fighting also is squeezing Iraq's health budget -- so much that only $68 was available per person.

"We used up our whole drugs budget in the first six months of this year," Bassim said.

In Khadimiyah Hospital, a young girl is rushed in - wounded in a mortar attack.

But security has improved so much that war trauma patients like this are now the exception.

But the beds are still full, and medical staff who thought better security would let them deliver better care are bitter.

"I am so hurt that my patients are suffering and can't do anything for them for lack of simple things that are available in every country in the world," one doctor said.