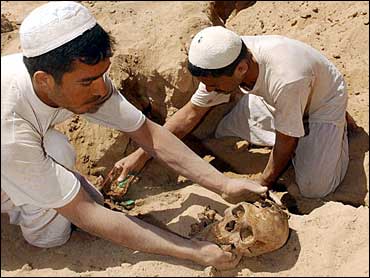 With shovels and their bare hands, Iraqis on Sunday excavated a mass grave filled with the remains of dozens of people who witnesses said were executed after a 1991 Shiite uprising.

The rebellion was encouraged by the United States but crushed without American intervention by Saddam Hussein.

Fragments of watches, a woman's blue slipper, bloody clothing and pieces of traditional black cloaks often worn by Iraqi women were found at the gravesite, some 13 miles northwest of Najaf, one of the most holy cities for Shiite Muslims. Bullet casings also were found near the graves.

More than 25 bodies were unearthed Saturday, and at least 10 had been identified, local Iraqis said. About 47 sets of remains, including those of women, were uncovered Sunday afternoon. The men and women were apparently lined up and shot.

Some bodies had identification cards in their pockets.

"I'm looking for my own relatives," said Jawad Shaker, who came to the site on Sunday. Another person said he was looking for his nephew who disappeared in 1991.