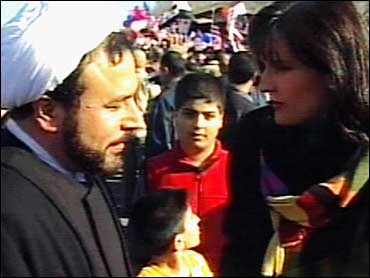 In front of one of many mosques where Iraqi expatriates have been coming for morning prayers, CBS News Correspondent Melinda Murphy reports, many say their prayers have already been answered.

"This is absolutely terrific for the Iraqi people. They couldn't wait until the day they can see the statue of Saddam's regime coming down in the heart of Baghdad," says Dearborn resident Marshall Shameri.

It was that very sight on television that sent so many Iraqis into the streets of Dearborn. And so many families into Hemlock Park, a sea of happy faces amongst a sea of American flags and farewell messages to a fallen dictator.

Ajmy Al Saidi says he had six family members die. "Two brothers, my father, my mother and small children," he says. So Wednesday was a special day for him. "I am very happy," he says.

But for some, the day was bittersweet.

"Today is the day of freedom," said Imam Husham Al-Husainy of the Karbalaa Islamic Center to a crowd of people waving American flags.

Murphy first met this imam just after the war started on March 22. At the time, he was concerned about the use of force.

Then he said, "There's a mixed feeling of doubt, fear, and hope."

But a lot has changed. Now he says he has "happy feelings coming from liberation of Iraq and getting rid of this worst dictator, Saddam. And sad feeling coming from going through all this, you know, war and bloodshed."

While some are troubled over the recent past, most people in Dearborn are hopeful about Iraq's future, particularly the women.

"From now on, they are going to know what are their rights.... They (didn't) know their rights before," says Sujad Ajina of Women for a Free Iraq.

"They're going to have better homes, good lives, and better schools," says one girl.

Who will head Iraq? That's yet to be determined. But all in Dearborn know what they don't want: an extended stay by coalition troops.

That's something that many in Dearborn are looking forward to doing. "As soon as possible. As soon as I finish this interview," says Imam Husham Al-Husainy with a big smile

Actually, the imam says he wants to wait until he's completely sure it's safe to return. And that's something that many people in Dearborn echoed. Many are looking forward to going back whether it's just to see family or simply return and go home again.

As coalition forces take control of the country Zainab Al-Suwaij, executive director of the Cambridge-based American Islamic Congress, which promotes better understanding of Muslim-Americans, says Sunnis, Shiites and Kurds will be able to live in peace.

"They've been living for so long together, and in the history of Iraq we don't really have any civil fighting. So Saddam and his regime is the one who tried to use one group against the other. But we are all united in a way that we are, all of us as Iraqis, doesn't matter what our religion or our ethnicity is. We all suffered under Saddam Hussein's regime," she says to The Early Show co-anchor Harry Smith.

Al-Suwajj had long had negative feelings for Saddam Hussein's brutal regime and was an active participant in the uprising that followed the Gulf War, a rarity for a woman. She threw grenades and helped offer medical assistance to rebels who were battling Saddam's Baath Party.

"I think this is the opportunity for the Iraqis to show the coalition these thugs that are around. Because these people, they want to take their names and their pictures and then get back to them. And that's what happened in 1991 after the failed uprising," she says.

Wednesday, she told Smith after watching the images of Iraqis bringing down the statue of Saddam, "It's amazing. It reminds me of 12 years ago... it seems that we are picking up where we left off 12 years ago."

After the war, Al-Suwajj escaped Karbala along with 20 family members and friends crammed into a car built for five. She currently lives in Boston.